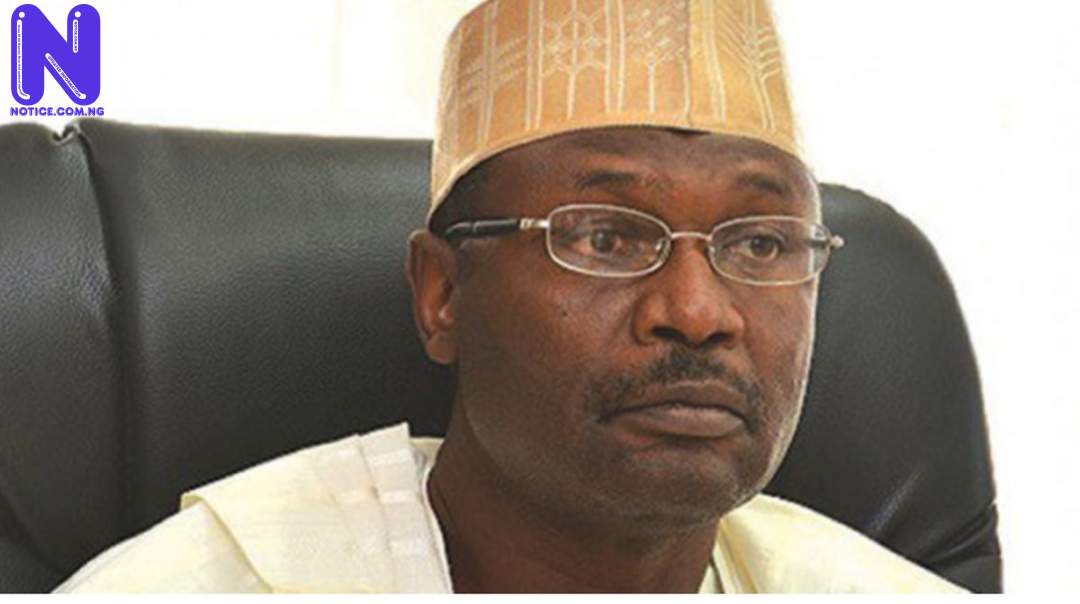 The Human Rights Writers Association of Nigeria, HURIWA, has said that it would not be a shock should the Chairman of the Independent National Electoral Commission Professor Yakubu Mahmood buys the N100 million presidential nomination and expression of interest forms of the ruling All Progressives Congress (APC) under the Buhari administration.

HURIWA said this following the decision of the Governor of the Central Bank of Nigeria, CBN, Godwin Emefiele and the Attorney-General of the Federation and Minister of Justice, Abubakar Malami (SAN) who have declared their interests to contest to be the President of Nigeria and Governor of Kebbi State respectively whilst refusing to resign their current offices.

HURIWA noted that the laws setting up the CBN and INEC banned holders of such offices from running for political office whilst still holding on to the positions from joining partisan politics.

The rights group said that Professor Mahmood should be allowed to buy his own N100 million presidential nomination form from the APC should he decide to do so and be allowed to conduct the 2023 polls at the same time.

HURIWA said legally, the CBN governor is violating the law by going into partisan politics as a holder of the position of Governor of CBN because As stated by the extant Central Bank of Nigeria Act.

The act said that “A person shall not remain a Governor, Deputy Governor if he is -(a) a member of any Federal or State legislative house; or (b) a Director, officer or employee of any bank licensed under the Banks and Other Financial Institutions Act.”

“The Governor, Deputy Governor or Director shall cease to hold office in the Bank if he -(a) becomes of unsound mind or, owing to ill health, is incapable of carrying out his duties…”

It adds that if the Governor, any Deputy Governor of Director of the Bank dies, resigns or otherwise vacates his office before the expiry of the term for which he has been appointed, there shall be appointed a fit and proper person to take his place on the Board for the unexpired period of the term of appointment in the first instance.

HURIWA lamented that Nigerian People have so much indulged Buhari which is why despite his monumental show of incompetence, there is little signal of public angst by way of public peaceful demonstration which is why there is so much official impunity and lawlessness by the appointees of President Muhammadu Buhari.

HURIWA said: “If the so-called rice farmers who reportedly collected a lot of financial empowerment from the government through the current Governor of the Central Bank of Nigeria can be said to have bought with his tacit approval the N100 million presidential nomination and expression of interest forms of the ruling APC and the Heavens have not falling and Buhari is pretending like he is in another planet and therefore is not aware, what if the Chairman of INEC who is banned statutorily from partisan Politics just like the CBN Governor decides he will be participating in the Presidential poll through the political family of President Muhammadu Buhari whose members the Spokesman of the President Garba Shehu said once they enlist into the party their past misdeeds are forgiven, therefore the Chairman of INEC would be allowed to buy the Presidential nomination form by President Muhammadu Buhari going by his body language.”

HURIWA through the National Coordinator Comrade Emmanuel Onwubiko said the decision of Buhari to allow his appointees to desecrate extant laws and to commit colloidal abuses of their powers by dabbling into partisan politics whilst still holding on to publicly funded offices is a breach of section 15(5) of the Constitution which mandates Government to eradicate corruption practices and abuse of powers.

READ ALSO >>> Intervene in plots to cause war in Nigeria by killing Bishop Kukah – HURIWA begs US, UK, Canada