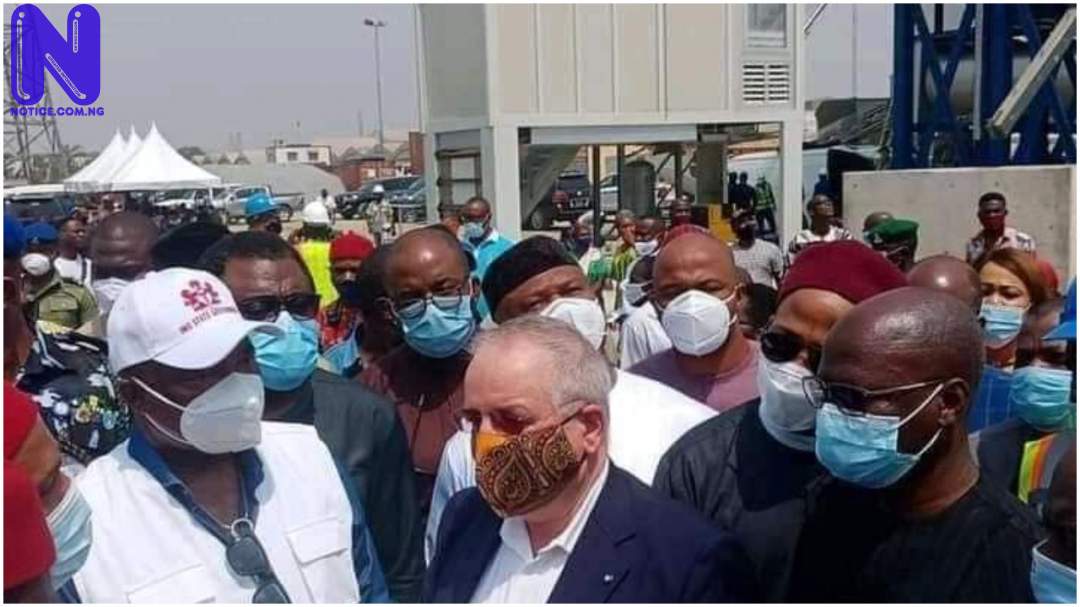 Igbo leaders comprising Governors, Ex-Governor’s, serving federal ministers, Ohanaeze Ndigbo, members of political parties from different political affiliations and State Government functionaries in Igbo speaking states at the weekend, embarked on the assessment of the ongoing construction of the second Niger Bridge project being undertaken by Julius Berger.
During a brief ceremony preceding the inspection, Imo State Governor, Senator Hope Uzodinma commended President Muhammadu Buhari for making sure the project never stopped.
Uzodinma expressed great optimism that the bridge would be ready by 2022, stressing that ndigbo will know the difference between All Progressive Congress, which he posited, is a party that delivers infrastructure and the other political parties that are known for abandoned projects.
The Imo Governor also lauded the new leadership of Ohaneze Ndigbo-led by Professor George Obiozor for starting on a positive note with this inspection and stated that diplomacy and dialogue is the way for Ndigbo.
According to him, there is nothing Ndigbo can not get if only they follow diplomacy and dialogue.
He urged Ndigbo to embrace the All Progressives Congress and take advantage of the current membership registration and revalidation exercise to join the governing party.
The President General, Ohanaeze Ndigbo, Professor George Obiozor on his part, lauded the speedy rate of work on the construction, adding that ndigbo are impressed with the level of work on the project and assured of the continued support of the people of Igbo nation to enable government implement its developmental policies.
In their separate speeches, the Honorable Minister of State, Mines and Steel Development, Dr. Uchechukwu Ogah, Minister of Science and Technology, Ogbonnaya Onu, and Minister of State for Education, Chief Emeka Nwajiuba, expressed satisfaction with the bridge project.
They reiterated the commitment of President Muhammadu Buhari-led administration in ensuring that every nook and cranny of Nigeria feels the positive impact of democracy, especially in the execution of critical infrastructure projects.