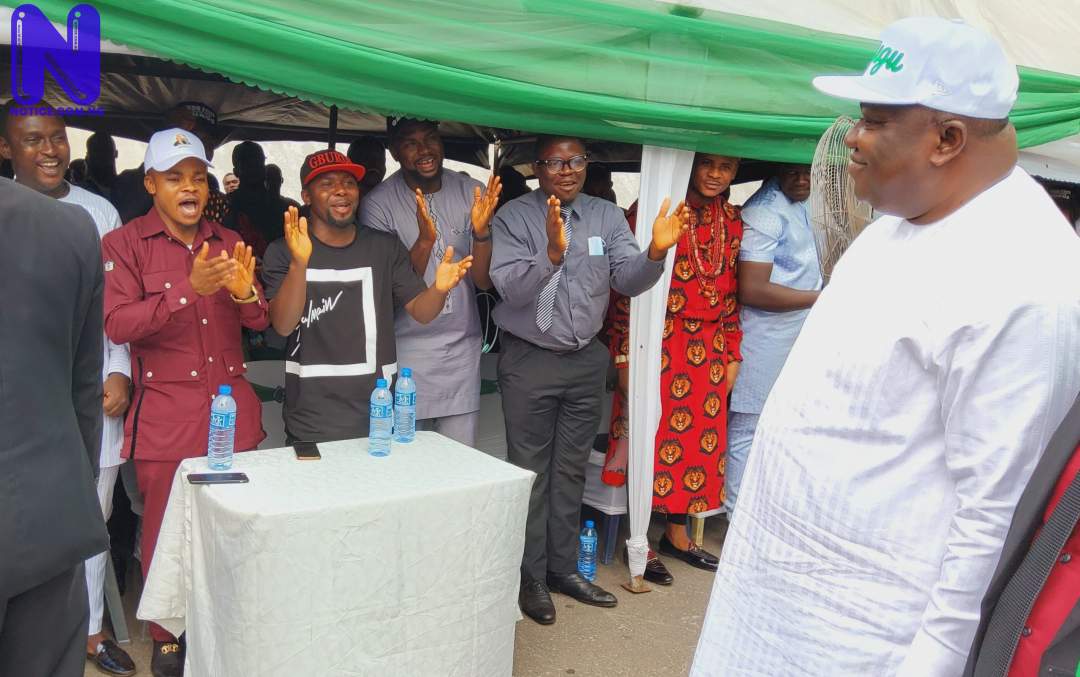 Igbo-Etiti youths disclosed that their support for Gov. Ugwuanyi is in recognition of his good works in Igbo-Etiti LGA in particular and Enugu State in general.

The youths stressed that their unanimous support for the governor's senatorial bid is also borne out of their conviction that his wealth of experience in the National Assembly will be of immense benefit to the people of Enugu North Senatorial District and beyond.

They pointed out that the governor has accommodated youths of Igbo-Etiti LGA in his administration more than any other local government in Enugu State, stressing that their council area is a major beneficiary of political appointments in the state.

Speaking on behalf of the youths, the newly elected President of Igbo-Etiti Youths, Nicholas Odozor, thanked the governor for the attraction of Federal Polytechnic, Ohodo, to the Igbo-Etiti LGA as well as construction of Type-3 Primary Healthcare Centre in the council area, among other projects.

Odozor also expressed gratitude to Gov. Ugwuanyi for the appointments of illustrious sons of Igbo-Etiti LGA as the Secretary to the State Government in the person of Professor Simon Uchenna Ortuanya, the Commissioner for Lands and Urban Development, Nnanyelugo Chidi Aroh, the Special Adviser to the Governor on Media, Mr. Samson Ezea and numerous others as Senior Special Assistants (SSAs), Special Assistants, (SAs), Executive Assistants (EAs), among others.

"Your Excellency, we came to pay solidarity to you and to thank you for all you have done for us in Igbo-Etiti LGA.

"We are aware of the Federal Polytechnic, Ohodo, you attracted to our area. It is a great achievement and we thank you. The health centre (Type-3 Primary Healthcare Centre) in our council area is another major achievement of your administration that is of great benefit to our people.

"We are aware of your senatorial bid and we know that you are familiar with the National Assembly and your wealth of experience will benefit our people. It is a privilege.

"Igbo-Etiti LGA is among the most populated LGAs and we assure you that we will deliver you and others overwhelmingly,” he said.

Also speaking, the Youth Leader of the Peoples Democratic Party (PDP) in Igbo-Etiti LGA, Ifeanyi Atunya, equally thanked Gov. Ugwuanyi in a special way for his benevolence and commitment to the progress of the youths in the council area, appreciating the governor for the emergence of a youth as the chairman of the council in the person of Hon. Ikenna Nwodo.

Atunya maintained that "Igbo-Etiti LGA is the only LGA that has more youths in the government of Enugu State," adding: "Our two House of Assembly members, Rt. Hon. James Akadu and Rt. Hon. Ugo Ezenta Ezeani are youths. Our SSAs, SAs and EAs are youths. Our present LG Chairman is also a youth. We came to tell you that we are solidly behind you and will stand by you always."

Reassuring Gov. Ugwuanyi of their support, the youth leader told the governor that they will mobilise effectively to deliver him and other candidates of the PDP in 2023, including the party's governorship candidate, Barr. Peter Ndubuisi Mbah, stressing: "PDP is Igbo-Etiti and Igbo-Etiti is PDP. There is no shaking. We are solidly behind you, Your Excellency.”

Speaking in the same vein, the Director General, Nsukka Youths for Good Governance, Clinton Ogbonna, went further to reassure Gov. Ugwuanyi of the unflinching support and solidarity of Igbo-Etiti youths and commended the governor for his youth-friendly initiatives that have impacted their lives positively.

"Your Excellency, what we are assuring you is that we have a date with you come February 2023. You don't have any opposition in Nsukka in the coming senatorial, governorship and other elections.”

"You picked many young people from nowhere and empowered them. We see you as a leader and father to the fatherless and we see you as a governor of the common people.

"Our support is to recognise you in Igbo-Etiti and beyond. We will recognise you even after occupying the office of the governor and representing us in the senate. We are going to the grassroots, and our wards to deliver," he assured.

Speaking on behalf of the women, Sharon Nwangwu, applauded Gov. Ugwuanyi for being gender-friendly especially the bold step he took towards the emergence of Hon. Mrs. Nkechi Ugwo-Oju from Igbo-Etiti LGA as the first woman to be elected as chairman of a local government area in the state.

Responding, Gov. Ugwuanyi appreciated them for their support and solidarity, expressing delight at their comportment and sense of vision in electing their executives and promoting the set objectives of the group, including encouraging and mobilising people for PVC registration, and called on youths in other LGAs to emulate them.

The Governor thanked the Igbo-Etiti youths for promoting peace and good governance in Enugu State and assured them of the support of the state government.

Gov. Ugwuanyi used the opportunity to thank all stakeholders of Enugu State for their support to his administration and the existing peace in the State.