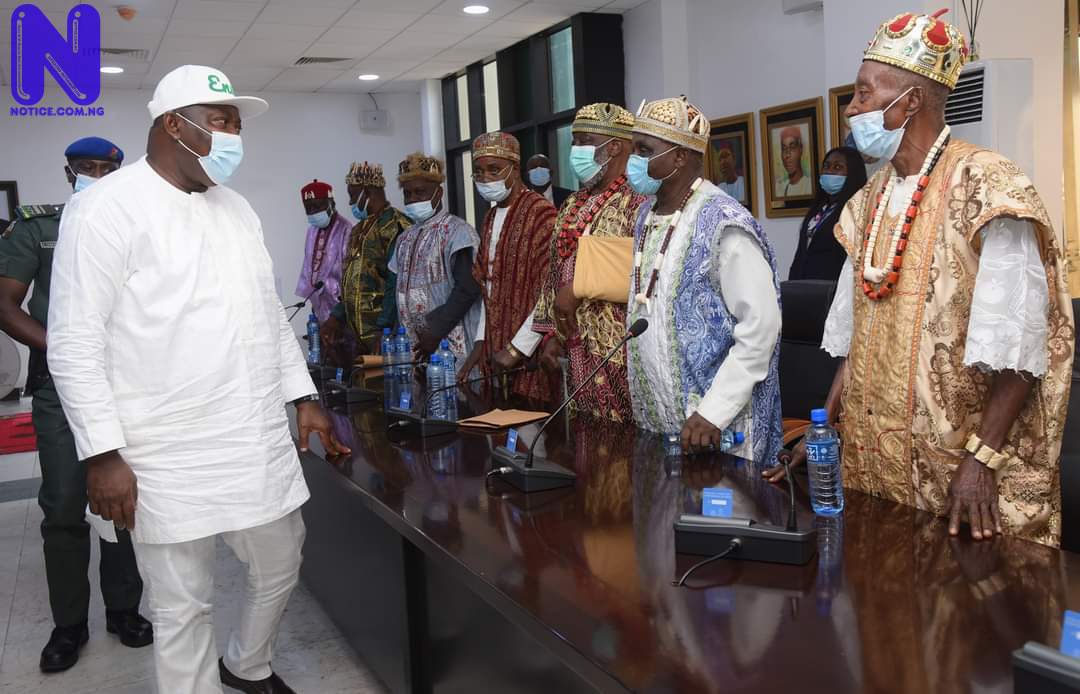 Traditional Rulers from Igbo-Etiti Local Government Area of Enugu State, on Thursday, paid a solidarity visit to Governor Ifeanyi Ugwuanyi at the Government House, Enugu, commending him for his giant developmental strides especially in the rural areas as well as his unparalleled commitment to peace and security in spite of the nation's economic, security and public health challenges.

The Royal Fathers expressed delight that the peace, security and good governance entrenched in Enugu State by Gov. Ugwuanyi's administration have made the state "the destination of choice for all people in Nigeria, particularly our brothers of the South East".

Led by the Chairman, Igbo-Etiti Traditional Rulers Council, HRH Igwe Michael C. Odo, the Traditional Rulers, said: "Your Excellency, we visit you today with pride and satisfaction. It is indeed no gain saying that since you came into office in 2015, you have manifestly and undoubtedly shot Enugu State into global reckoning with your massive and wide spread infrastructural development across the 260 wards and 450 autonomous communities in the state.

"We cannot thank you enough for the love you have shown to our people of Igbo-Etiti Local Government Area. You have indeed shown this love in the number of critical appointments you have given to our people, like never been done in the history of the state.

"Your Excellency, we are greatly indebted to you for the massive developmental projects you have done in our Local Government.

"Prominent amongst them include construction and commissioning of the state-of-the-art Ogbede General Hospital with Staff Quarters; construction of all required structures for the immediate take off of the Federal Polytechnic Ohodo which you attracted; construction of the Ohodo-Umunna-Ozalla-Ohebe-Aku Road by the State Rural Access and Mobility Project (RAMP).

Stressing that they are proud of the unique and outstanding efforts of his administration in transforming the state and ensuring peace and security of lives and property, the Monarchs assured Gov. Ugwuanyi of "our loyalty and uncompromising support", saying: "As Traditional Rulers we are irrevocably committed to the declaration of our people at the ‘Odinma Nsukka Rally at Nsukka High School".