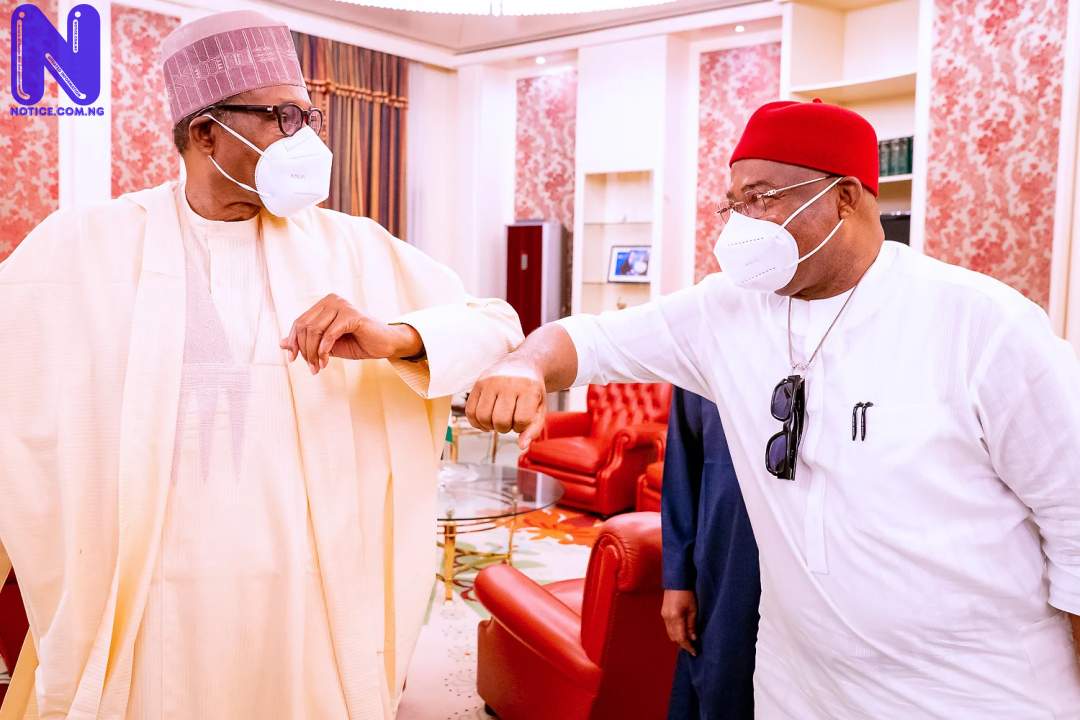 Imo State governor, Senator Hope Uzodinma, has said he met President Muhammadu Buhari to discuss progress made on efforts to tackle insecurity in his state.
Press had reported that Buhari received Uzodinma at the Presidential Villa in Abuja on Tuesday.
The meeting is coming a few days after the governor ordered the arrest of Rochas Okorocha and admitted that he also ordered military action in Orlu.
Speaking to State House correspondent, Uzodinma said he invited the military to douse a recent uprising in Orlu to avoid a repeat of what happened during the recent End SARS protests.
He stressed that the situation in Orlu had gone beyond what could be handled locally, hence his invitation to the military.
”Well, the issue of bringing the military to Imo state? You recall, during the End SARS protests, a lot of properties were damaged in Imo state, police stations were burnt down, soldiers were killed, their rifles removed from them.
“And immediately after the End SARS, we thought it was over. Then, issues of kidnapping, where you know, a Catholic bishop was kidnapped, who was killed. And these militants came out and begin to shoot. We’ve lost lives, market women were killed, old women were raped in the Orlu area of Imo state and they visited this serious terror on the citizenry.
“And then I came here (presidential villa), pleaded with Mr. President for his support and he sent additional support by sending in police and the military also came in. And that is where we are.
“It was on my invitation that the military came. And I did that because I know the situation was beyond the local arrangement, we needed help. And the help was given to us.
” I informed Mr. President that we are already making progress. And of course, you know, President is a very peaceful man.
“The federal government may be negotiating with the Boko Haram, that God knows if I have the opportunity to see any man who is taking lives. I will confront the person head-on. That is why we are the government.”
The Governor further said the situation in Orlu has now returned to normal and people are now going about their businesses.
“We are a government; it is our responsibility to protect lives. And while we have the Nigerian Army, Nigerian police. We had security challenges, we invited them to go to work.”