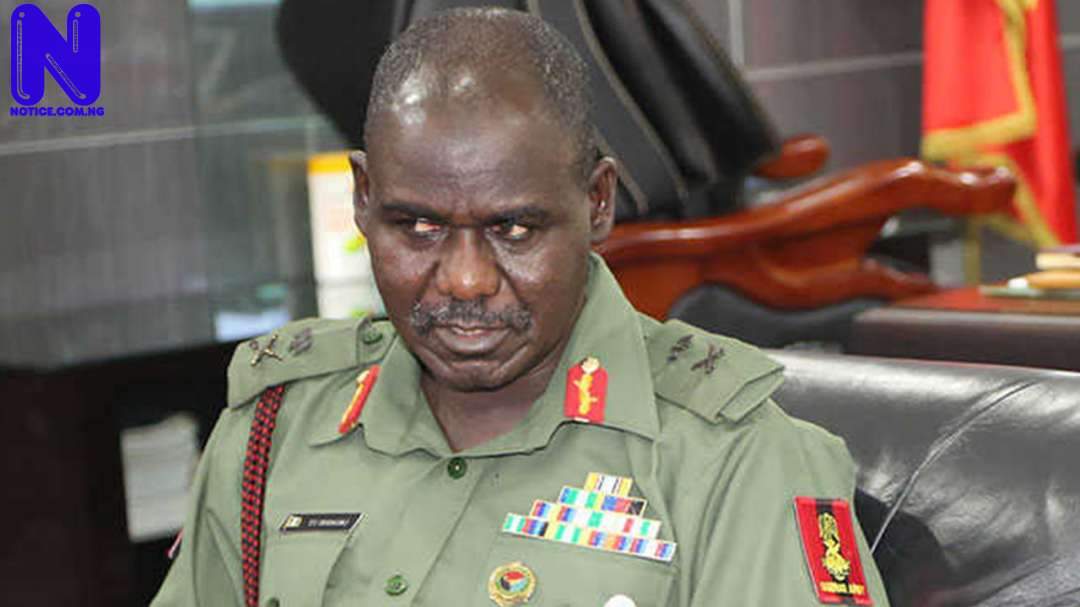 The Human Rights Writers Association of Nigeria, HURIWA, has called on the Chief of Army Staff, Yusuf Buratai to probe the General Officer Commanding, GOC, 82 Division and the Garrison Commander of 82 Division, Lasisi Adegboye, over alleged involvement in land grabbing activities in Enugu State.

HURIWA, a prominent Civil Rights advocacy group urged Buratai to investigate the GOC for alleged intimidation, cruelty, undue and unnecessary deployment of soldiers by a firm of developers in the state.

A statement by HURIWA’s National Coordinator, Emmanuel Onwubiko and National Media Affairs Director, Miss Zainab explained that the call followed a petition concerning the matter which was endorsed by the law firm of Chijioke Obinna and Associates based in Abuja.

HURIWA said it has been, “inundated with petitions from distressed Nigerian People especially from Enugu State South East of Nigeria regarding alleged cases of land speculations and deprivation of their right to own immovable property as recognized by the Constitution in Section 43 of the Nigerian Constitution.

“Besides, the Rights group has expressed optimism that the no-nonsense chief of Army staff Lieutenant General Tukur Yusuf Buratai reputed to be a professionally disciplined soldier will investigate the alleged involvement of the General officer commanding 82 Division and the Garrison Commander of 82 Division over alleged intimidation, cruelty, undue and unnecessary deployment of soldiers by a firm of developers in Enugu State.”

On the allegations made against the General Officer Commanding 82 Division in Enugu, Brigadier General Lasisi Adegboye over land-related rights violations, the rights group affirmed that it has “deep trust and confidence in the capacity of the hierarchy of the Army to entertain the comprehensive petition with a view to applying the most effective panacea to end the rights abuses.”

HURIWA stated that it is aware of many steps adopted by the civil-military relations Department of the Nigerian Army in the Army headquarters to improve the respect of the Human Rights of all Nigerian People in all internal military operations that are legitimate and done based on public interest.

It said the recent revocation of a land title allegedly connected with an illegal establishment of private housing estate in Enugu by the governor has indeed served the public interest of the natives who have persistently alleged deprivation of their access to their land.

The group also applauded a range of forward-looking decisions made by the Enugu Governor, Ifeanyi Ugwuanyi to check the proliferation of cases of alleged land speculations and land grab phenomenon in Obeagu/Amechi Awkunawnaw land of Enugu metropolitan area of the state reputed to be the political capital of the South East of Nigeria.

The statement reads: “Any Governor with a mindset that projects the state as investors’ friendly and yearns for rapid industrialization of the state must double up efforts towards tackling the threats posed by alleged land speculators and land grabbers so as to truly make the ease of doing business seamless and result-oriented. Land administration must be sanitized so as to attract good corporate citizens to invest in the state and create employment opportunities for the ordinary people of such states.

“We have just been informed about a letter dated November 27th 2019 issued under the Land Use Act, with specific reference to Article 1028 titled: “Notice Of Revocation Of Allocation Of 1097 Hectares Of Obeagu/Amechi Awkunawnaw Land, Enugu With Building Certificate Of Occupancy Registered As No. 20/20/1622 In The Lands Registry, Enugu,” and reportedly endorsed by Victor Chukwuemeka Nnam, the Commissioner of Lands and Urban Development Enugu state and addressed to Private Estate International West Africa and other members of the public who may have genuine interests in the above mentioned plot of land in which the Enugu state government stated thus: “Notice is hereby given to you who have or may still have genuine interests in 1097 Hectares of Obeagu/Amechi Awkunawnaw Land, Enugu that the allocation of the said 1097 Hectares of Obeagu/Amechi Awkunawnaw Land, Enugu registered as No. 20/20/1622 has been revoked for breach of covenant and conditions under section 28(5)(a) and (b) of the Land Use Act of 1976.”

HURIWA, therefore, challenged the Enugu State government to ensure that nothing will stand in the way of the government’s plans to industrialize the state and create an enabling environment for economic productivity and profitability by both the citizens and the state government.