How my brother killed our mother, left me with acid burn – 18-year-old victim cries for help 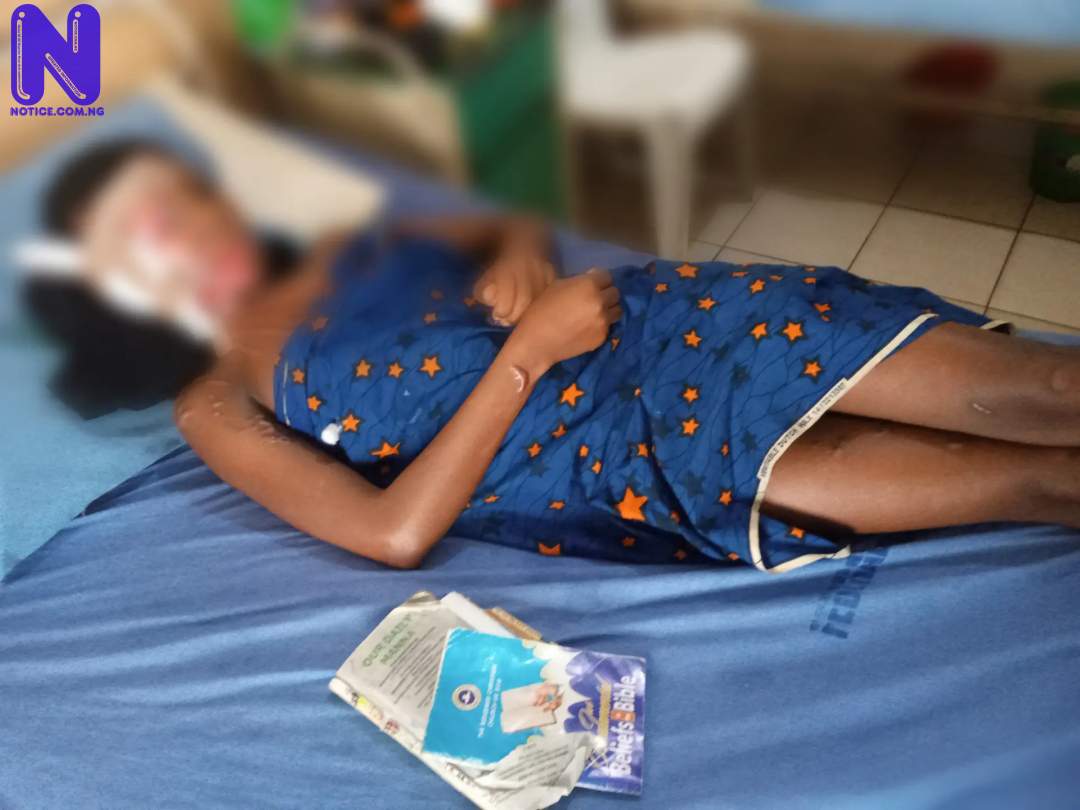 Family they say is the major bedrock of the society, a support force and an agent of socialization. What then happens to the main purpose of belonging to a family, when siblings become enemy of themselves, children becoming murderers of their parents and themselves.

One of such cases is that of Miss Munirat Alhaji, an 18-year-old indigene of Ojodu, Dekina Local Government Area of Kogi State, who was unfortunately burnt by acid poured on her by her own blood brother.

Munirat is currently going through severe pain and close to the point of self-condemnation, in the female surgical ward of Federal Medical Center Lokoja.

Press gathered that her brother who is currently cooling off in the Police net accused their mother of being responsible for his inability to be successful in life after consulting a witch doctor.

Narrating the incident on her hospital bed with pain, Miss Munirat said ” I was sleeping that unfaithful day at about 1am of 28th August 2019. Suddenly, I heard my mother shouting from her room. When I rushed down to her place, I discovered that my brother poured acid on her body. He didn’t stop there.

“My brother went further to use stick to hit mother as if something was manipulating him. When I tried to stop him from killing my mother, he then decided to pour the acid on my face and body. That was how I found my self in Federal Medical Center Lokoja. I was shocked when my brother said he consulted a native doctor who informed him that She is responsible for his travails.

“My mother died three months after both of us were admitted here in FMC Lokoja due to the primary damage done to her body by the chemical. Now for me to survive, the hospital said I need about two million Naira to undergo surgery and pay all outstanding bills in the hospital.

” I am from a poor family. My mother is dead now. Nigerian People should save my life. Don’t allow me to die like my mum due to the acid burns. My dream in life is to be a great woman, in this world. Please don’t allow this dream to die as being in a critical condition in Federal Medical Center Lokoja”

While pleading for financial support so as to increase her hope of survival, Miss Munirat said she could be reached via this phone number :08155546519. Also with the following account details:

Meanwhile, the doctor in charge of the case, Doctor Ebune Ojochide, a Consultant Plastic and Reconstructive Surgeon, with the Federal Medical Center Lokoja, in an interview with our correspondent stated that Miss Munirat, a Senior Secondary School II student was admitted on 29th August 2019 with acid burns which were said to be done by her sibling.

Dr Ojochide said a lot of treatment has been carried out on the patient, stressing that, an acid burn is not something that can be worked on immediately.

The surgeon noted that what they have now is the scary as the damages done to the skin needs correction and it requires stage by stage procedures to bring back to near perfection.

” The major reason why the attack was carried out was primarily to cause damage and disfigure the victim. We need to improve the functionaries such as the mouth, ear and appearance although not to perfection but near perfection. The major obstacle holding them is the challenge of mobilising funds for the surgery to improve her appearance and give her hope of survival,” he stated.

On the cause of her mother’s death, Dr Ebune explained that the mother sustained primary damages which resulted in her death.

He, in spite of that, appealed to the government to try and limit access to deadly chemical like acid, adding that it’s becoming worrisome that chemicals are been used to perpetrate crimes in the society.