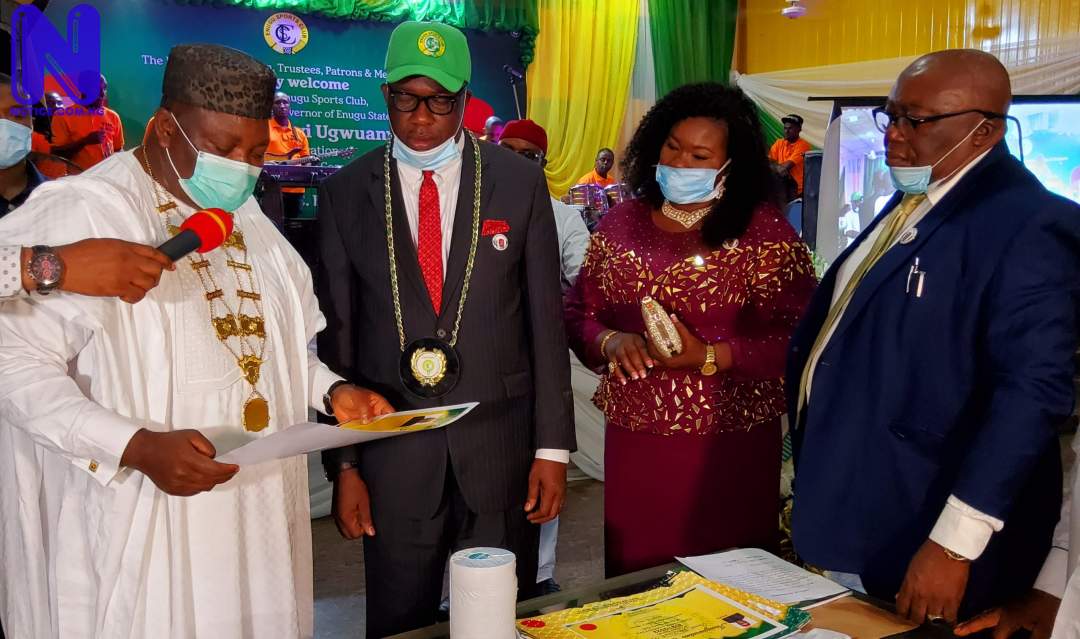 Gov. Ugwuanyi, who is the President of Enugu Sports Club, performed the exercise on Saturday at a colourful event held at the Club's arena in GRA, Enugu.

Enugu Sports Club is an elite, private members’ Club established in 1929 as a centre for relaxation and physical exercise through various outdoor and indoor games as well as a convivial atmosphere for intellectual, business and political fellowship.

Inaugurating the Committee, Gov. Ugwuanyi disclosed that "the Club has played significant roles in enriching the lifestyle of the Coal City elites while elevating the quality of leadership dialogue".

The governor congratulated the Club on the recent successful election of the new Executives particularly for the credibility and decorum that characterized the process.

"I am glad that the Club remains united and charged to set new records of accomplishments in the succeeding year. I also congratulate the new Executive Committee of our Club while expressing great hope in her inspiring transformation mantra as espoused by the Executive Chairman", he said.

The governor acknowledged the outstanding achievements of the immediate past Executive Committee led by Onyeka Owe as well as all the past leaders of the Club, adding that their immense contributions were responsible for the improvement in the Club infrastructure and governance processes over the years.

Gov. Ugwuanyi pointed out that Enugu State government, under his Presidency of Enugu Sports Club, has been providing enormous support to the Club, stressing that his administration remains committed to the sustenance of the support within the limit of its resources.

“Tonight is also an occasion to say thank you to the great members of this Club. The story of our dear State is incomplete without a generous mention of your priceless contributions.

"Your prayers, good wishes and advisories are highly cherished while the unchanging sentiments of your support and fidelity have been tonic to our administration's strive for good governance and optimal service delivery", the governor added.

In his address, the newly inaugurated Executive Chairman, Barr. Nwosu, on behalf of other members of the Committee thanked Gov. Ugwuanyi, other philanthropists and revered members of the Club for their support and assured that his leadership will not disappoint them in pursuing further the laudable vision of the body.