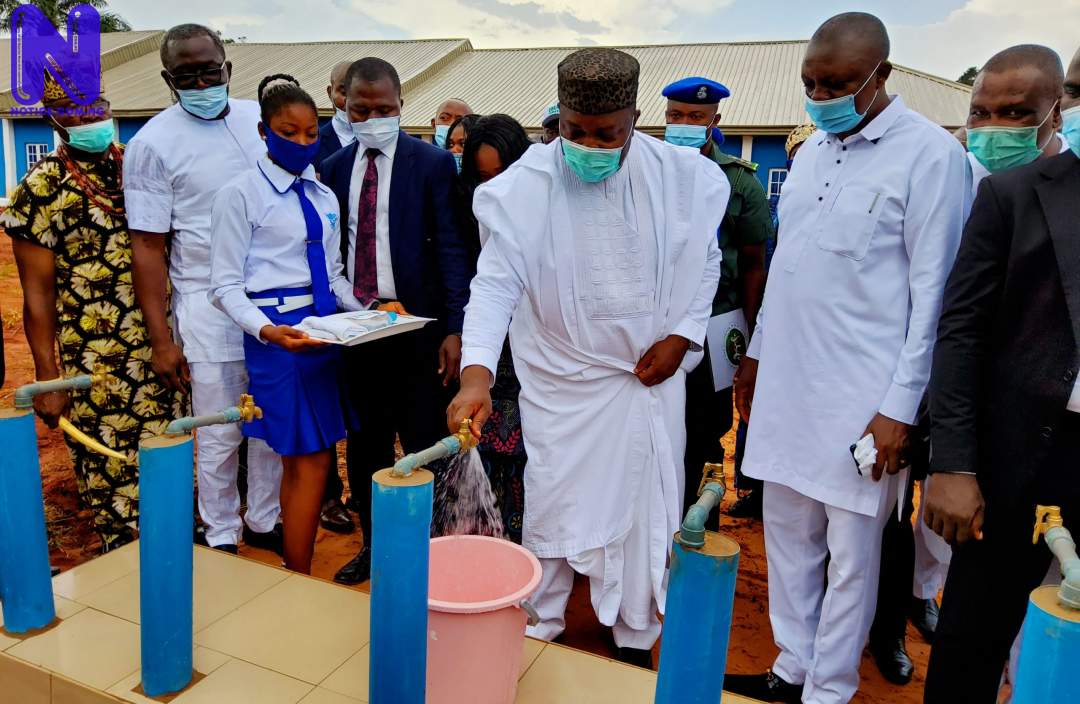 Governor Ifeanyi Ugwuanyi of Enugu State, on Tuesday, inaugurated multiple development projects executed by his administration in some schools in Enugu North Senatorial District of the state, concerning jubilation.
The projects inaugurated include the solar powered water boreholes newly constructed by his administration through the Post Primary Schools Management Board (PPSMB) in Model Secondary School and Urban Girls Secondary School in the University town of Nsukka, as well as Girls Secondary School Owerre-Ezeorba in Udenu LGA.
Also inaugurated at Girls Secondary School Owerre-Ezeorba, were two ultra-modern hostel blocks comprising 8 halls, a dining hall with kitchen; 60KVA Soundproof Electric Power Generator; renovated 28 classroom blocks and 800 capacity school main hall.
Gov. Ugwuanyi while in Nsukka inspected numerous ongoing construction projects in Command Secondary School, Orba, Udenu LGA, preparatory to its official commencement of academic activities, following its take-over by the military.
Speaking, the governor expressed delight that the newly constructed solar powered boreholes were executed by his administration to address water supply challenges in the schools, to advance the realization of the goals of the Enugu State School Water, Sanitization and Hygiene (WASH) programme.
Gov. Ugwuanyi added that the strategic aim of the water projects in the schools was also to stem the tide of hygiene-related infectiousness diseases, including COVID-19 and to create a conducive environment for teaching and learning.
The governor disclosed that his administration has significantly improved on the infrastructure of the schools.
He stated that the administration had in the recent past, renovated two hostel blocks, one dining hall and 9 buildings of four classroom blocks each, in Modern Secondary School, Nsukka, which facilitated the emergence of the school as the 5th best in the Public School Category in Nigeria, in the 2019 edition of the President’s Teachers and Schools Excellence Award.
This feat, As stated by the governor, was based on the Federal Ministry of Education’s assessment of infrastructure, teaching and learning, quality of teachers and school administrator as well as school performances in Senior and Junior WAEC examinations.
“In this benchmarking, Model Secondary School, Nsukka brought pride to the state and the school Principal, Mr. Obiora Ezugwuorie has long been appreciated through the Enugu State Executive Council (EXCO) approved promotion to Salary GL-17”, he said.
While congratulating the Principal, staff and students of the school for their diligence, Gov. Ugwuanyi, upon the request of the students, approved the immediate construction of a male hostel and an ultramodern hall for the school.
At Urban Girls Secondary School, Nsukka, the Gov. Ugwuanyi administration also carried out a turn-around renovation of three-unit buildings of 8 classrooms which were hitherto damaged by rainstorms in 2018. It equally reconstructed a multi-purpose hall with seating capacity of above 1000 students.
In their speeches, the State Commissioner for Education, Professor Uche Eze, the Chairman of PPSMB, Barr. Nestor Ezeme and the Principals of the schools, expressed gratitude to Gov. Ugwuanyi for his administration’s support and special attention in education, assuring the governor that history will forever remember his footprints in the sector and beyond.