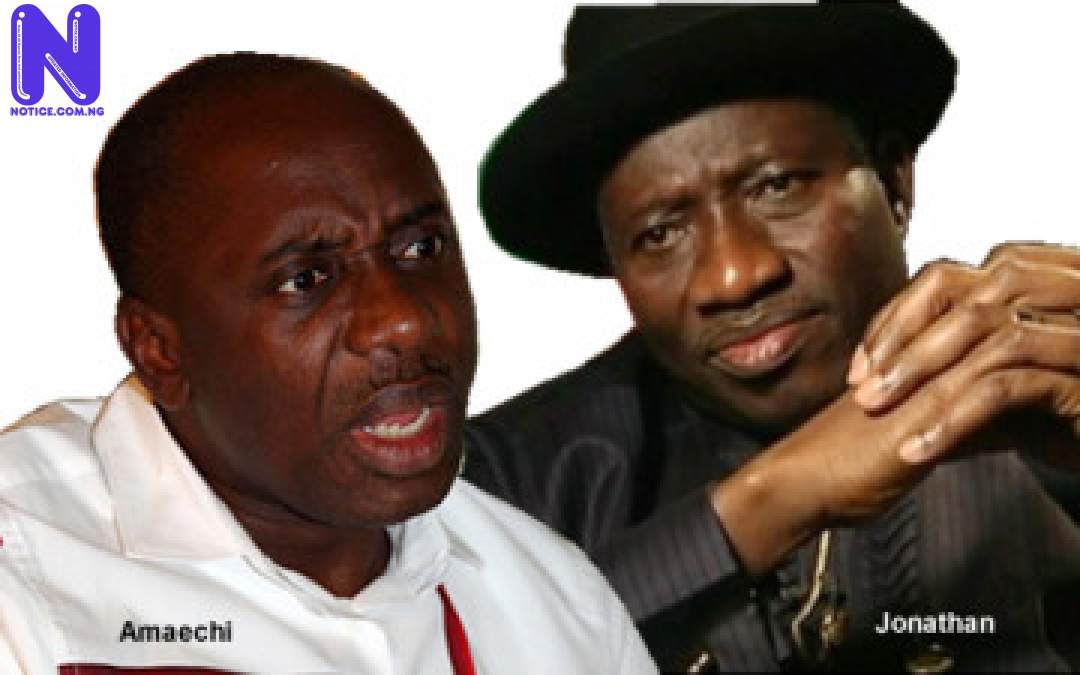 Rivers Governor and Director-General of the All Progressives Congress Presidential Campaign, APCPCO, Mr. Chibuike Amaechi, claimed yesterday that God has revealed who would win the March 28 presidential election, but was quick to add that President Goodluck Jonathan was not the one revealed.

Making this claim at the South-South zonal rally of the APC staged at the Liberation stadium in Port Harcourt, Rivers State, Amaechi called on Nigerian People to support the aspiration of the APC presidential candidate, Gen. Muhammadu Buhari (rtd.). This was as he noted that the candidate has the interest of the nation at heart.

The Governor, while stating that “God has shown us who would be president and we know that it is not Jonathan,” soared biblically, “Do you remember the Jonathan in the bible? What did he do? He betrayed his father, right? This time around, we need a man that would deliver the country for both Christians and Muslims. There will be no Christian or Muslim, but a Nigerian government,” he asserted.

The APCPCO DG, who came hard on the federal government over its amnesty programme, said Buhari would not discontinue the initiative if elected, but would reform it in a way that would benefit the people. “Buhari has promised that the amnesty programme will continue when he assumes office and that he will include all those that the current president left behind,” he promised.

Amaechi continued, “Jonathan only carried a few persons along. He bought guns for them, but we will reorganize the amnesty programme and treat it as a social welfare programme because we believe that it should not be a compensation for crime.

“While he is creating jobs, he is also trying to create substance for those without jobs,” he alleged.

While accusing the ruling Peoples Democratic Party (PDP) of using police officers to harass members of the opposition party, he encouraged those at the rally to endure to the end since the presidential election is barely two weeks ahead.

“To tell you how violent the PDP is, they have no respect for women; they waylaid my wife. Neysom Wike (the PDP gubernatorial candidate in Rivers) organized that attack in his wife’s village,” he said, adding that, “Over 30 members of APC have been killed and majority of them died in police detention. There is no day that passes by that they do not kill APC members, even today they will kill one.

“In Rivers state, we are not running against the PDP, but the police. Today, one of our Chairmen is inside a cell in Abuja because he is a member of APC.

“People say I am courageous but let me tell you what I do. I kneel down to pray and part of my prayer is that God, I may die as I leave here now but if I die, let me make heaven. So just pray and endure all their intimidation, but if you want your own freedom, you know what to do on the day of the election,” the Governor suggested.

While flaying the argument of Liyel Imoke and other PDP governors that the Independent National Electoral Commission, INEC, would have disenfranchised majority of Nigerian People had the election taken place on February 14, Amaechi said that the ruling party is only jittery of the general election.

Press recalls that at the last PDP Governors’ Forum meeting in Lagos attended by Imoke, he and his colleagues had justified the postponement of the elections with Governor Godswill Akpabio of Akwa Ibom saying that Nigerian People should be appreciative of the party for pushing for the adjournment.

But Amaechi at the APC rally disagreed with them, insisting that the national electoral body was fully prepared for the elections. He said the ruling party influenced the postponement out of fear.

His words, “For the first time, I can see fear in the eyes of PDP. Even the president is afraid. The president got 1.8 million votes in Rivers state in 2011 let’s see how that will happen this time around.

When the stage was set for the APC presidential candidate, Gen. Muhamadu Buhari (rtd.) to speak, he warned that if Nigerian People truly want to put an end to instances of corruption in the country, they must not cast their ballot for the PDP at the polls.

The APC standard bearer, who harped on the danger of allowing corruption to thrive in the country, told the party supporters who had converged at the stadium that, “If we don’t kill corruption, this corruption will kill us. If you make a mistake of voting the PDP, I assure you, you will regret it.

“I want you to be serious about your country. If we miss this opportunity, we will be worst for it, God forbid,” he told the multitude.

Buhari asserted that the country would not have had challenges of insecurity and poverty if the PDP-led federal government had been responsible with public funds.

While decrying the drop in the value of the naira, the opposition leader assured that he would reinvest all that would be saved from the crusade against corruption into building key sectors of the economy.

Speaking earlier, immediate past governor of Bayelsa State and an APC senatorial candidate in Bayelsa, Chief Timipre Sylva, described Buhari as the only weapon Nigerian People can use to fight corruption. Sylva, who assured that corruption would drop by 80 percent when the APC standard bearer is sworn in, urged the people to vote massively for him because, “he has the right qualities to lead the country”.

National Chairman of the party, Chief John Odigie-Oyegun and governorship candidate of the party in the state, Dr. Dakuku Peterside, used the rally to drum up support for the party ahead of the elections.

Meanwhile, the Peoples Democratic Party, PDP, on Thursday reassured its supporters that the soaring nationwide acceptance of President Goodluck Jonathan and its other candidates had convinced the party of its victory in the 2015 general elections.

Disclosing this in a statement issued in Abuja by the National Publicity Secretary of the party, Olisa Metuh, PDP said it was very impressed with the quality of leadership

President Jonathan is providing in the campaigns, which runs on his enviable performance and numerous verifiable achievements in all sectors of the economy.

According to the statement, “President Goodluck Jonathan has left no one in doubt that he is a national leader and one of the greatest bastions of Nigeria’s unity. He has remained committed to the stability and progress of our great country, a stance, which has continued to endear him to the electorates. Indeed, the PDP is very proud of him and his leadership”.

The ruling party claimed that the achievements of the Jonathan-led administration have touched various sectors of the economy, positively impacting on the lives of all cadres of Nigerian People across the zones and amongst all tribes, irrespective of class, creed and gender, describing this as one of the major factors that has stabilized the polity in the face of daunting challenges.

While calling on Nigerian People to be resolute in their support for President Jonathan’s re-election bid, the party said, “Our focus is on a new era of prosperity driven by the fruition of our people oriented policies and programmes, with a dynamic economy where market forces are combined with the forces of partnership, solidarity and cooperation for the benefit of all Nigerian People”.

PDP, which thanked its members and supporters for showing concerns over speculations about the loyalty of its National Chairman, Ahmadu Adamu Mu’azu, charged them to remain focused on the campaigns and not to be distracted, particularly since Nigerian People are sure they will solidly queue behind the party at the polls.