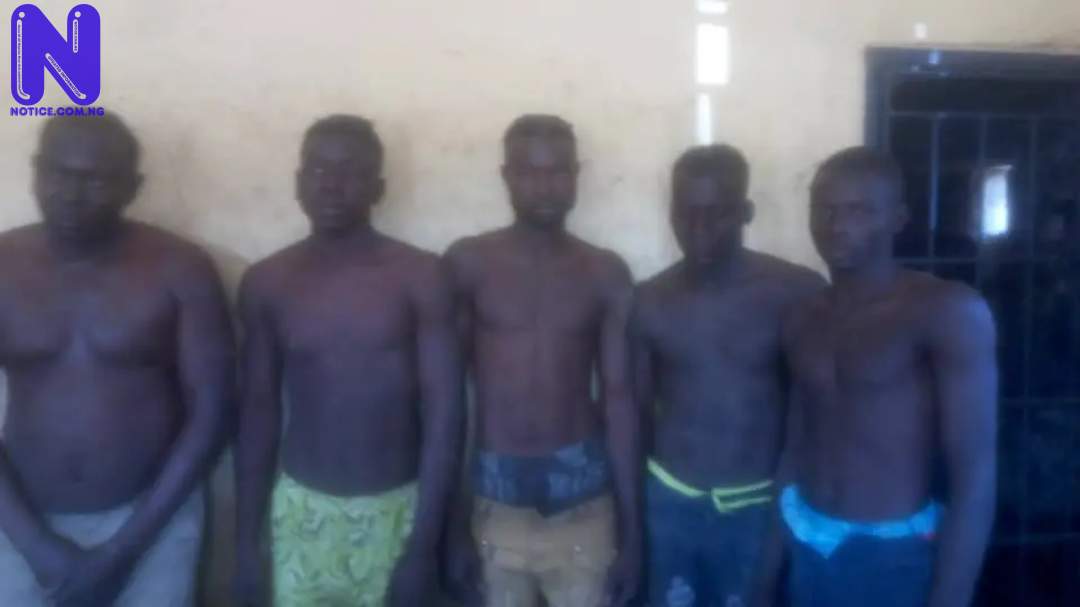 The Nigerian Security and Civil Defence Corps, NSCDC, Tuesday paraded five suspected ritualist who was caught in Jalingo, Taraba state capital while trying to kill a 10-year-old boy in the bush.

The NSCDC arrested the five young men in the bush near Kona village based on intelligent information.

The spokesperson of the NSCDC in Taraba state command, Mr. Godwin Peter while addressing journalists at the office of the command said the men of the NSCDC acted swiftly after a security tip, leading to the arrest of the security situation which would have resulted to jungle justice.

Peter said the ritualist came to the area and convinced the 10-year-old boy that they needed him to go and cut the nails of their boos few meters away.

He said when the boy followed them outside his house, the villagers who suspected the actions of the five young men followed them behind only to discover that their aim was to kill the boy for their ritual purpose.

“When we got the security information that some young men suspected to have been carrying out ritual activities in Kona village were caught with a ten years old boy, our men moves swiftly to the village and arrested the situation”

He further disclosed to journalists that the five suspects have already confessed to the crime and they will be prosecuted As stated by the laws of the land.

Peter also told our correspondent that the 10-year-old boy who the five suspected ritualists were caught with had a deep machete cut at his back and was rushed to the Federal Medical Center FMC Jalingo.

“they cut him with machetes and there was blood gushing out of the wound, we, therefore, rushed him to the hospital for treatment”

When our correspondent visited the FMC, the hospital management said the 10-years-old boy was in the Intensive Unit of the hospital and the Doctors working on him needed time to work.