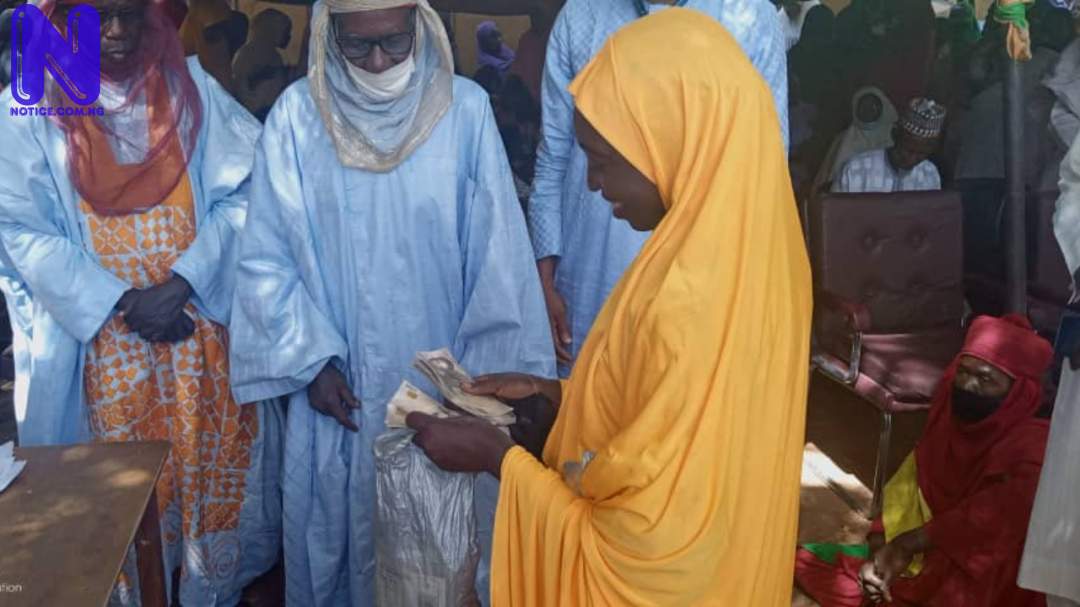 The Federal Government on Thursday began the disbursement of N20,000 grant to rural women in Bauchi State for them to start small businesses with a view to alleviating their sufferings.
While flagging off the disbursement in Azare, the headquarters of Katagum Local Government Area of the state, the Minister of Humanitarian Affairs, Disaster Management and Social Development, Hajiya Sadiya Farouq, informed that over 150,000 beneficiaries across the 36 states of the federation, including the Federal Capital Territory (FCT) would benefit from the programme.
The grant, which she said was meant for rural women in the country, As stated by the minister was introduced in 2020 by her ministry as part of President Muhammadu Buhari’s social inclusion and poverty reduction agenda.

Represented by the Deputy Director Humanitarian Affairs in the ministry, Dr. Abubakar Suleiman, Farouq explained that the programmes is meant as part of Buhari’s efforts aimed at lifting 100 million Nigerian People out of poverty in 10 years.
According to her, the cash disbursement is designed to provide a one-off grant to some of the poorest and most vulnerable women in rural Nigeria.
The minister added that it is also meant to boost beneficiaries’ income, enhance their food security as well as enable them contribute towards improving their standard of living.
“A grant of N20,000 will be disbursed to over 150,000 poor rural women across the 36 states of the federation and the Federal Capital Territory.
“The grant is expected to increase access to financial capital required for economic activities.
“It is our hope that the beneficiaries of this programme will make good use of the opportunity to increase their income, enhance their food security and generally contribute towards improving their living standard,” the minister said.
Farouq declared optimism that with the complementary effort of the Bauchi State governor, Senator Bala Mohammed, beneficiaries of the grant would be on their way out of poverty to prosperity.
According to her, “I am optimistic that with support and cooperation of Your Excellency and other stakeholders present here, we can lift 100 million out of poverty by 2030.”
The Humanitarian Affairs Minister informed no fewer than 54,738 poor and vulnerable households drawn from 16 local government areas of the state have benefitted so far from the Federal Government’s Conditional Cash Transfer (CCT) programme.
She informed that since September 2016, the beneficiaries, who are receiving N5,000 monthly under the CCT programme, have so far received about N3 billion.
The conditional cash transfer, Farouq explained, was designed to deliver timely and accessible cash transfers to beneficiary households and support development objectives and priorities as well as improve household consumption.
She added further that the CCT programme is also aimed at improving school enrolment and attendance, encouraging household financial and asset acquisition and engaging beneficiaries in sustainable livelihood.
“The Conditional Cash Transfer Programme commenced in September 2016 with the aim of responding to deficiencies in capacity and lack of investment in human capital of poor and vulnerable households.
“The programme provides targeted monthly base cash transfer of N5,000 to poor and vulnerable households with the sole aim of graduating them out of poverty.”
She listed the benefitting local government areas in the state where beneficiaries come from as Gamawa; Tafawa Balewa; Alkaleri; Darazo; Bogoro; Zaki; Warji; Ningi; Katagum; Kirfi; Jamaare; Dambam; Dass; Itas Gadau Misau and Toro.
“The conditional cash transfer programme in Bauchi State was intended to improve the socio-economic and livelihood of over 54,738 poor and vulnerable households enrolled across 16 local government areas of Gamawa, Tafawa Balewa, Alkaleri, Darazo, Bogoro, Zaki, Warji, Ningi, Katagum, Kirfi, Jamaare, Dambam, Dass, Itas Gadau, Misau and Toro, with a total disbursement to date of N2,987,360,000,” the minister informed.
Farouq noted that since the inception of Buhari’s administration in 2015, the Federal Government has been paying more attention to protecting and promoting the plight of the poor and vulnerable in the country.
This, she stated, informed the Federal Government’s decision to initiate the National Social Investment Programme (NSIP) as a strategy for enhancing social inclusion, declaring that the NSIP is one the largest social protection programmes in Africa.
She further submitted that the NSIP has positively impacted on the poor and vulnerable Nigeria since its introduction in 2016.
“Since its introduction in 2016, it has impacted positively on the lives of the poor and vulnerable in Nigeria. I have personally witnessed the life-changing experiences of people who lived below the poverty line and those that are vulnerable to shocks,” she said.