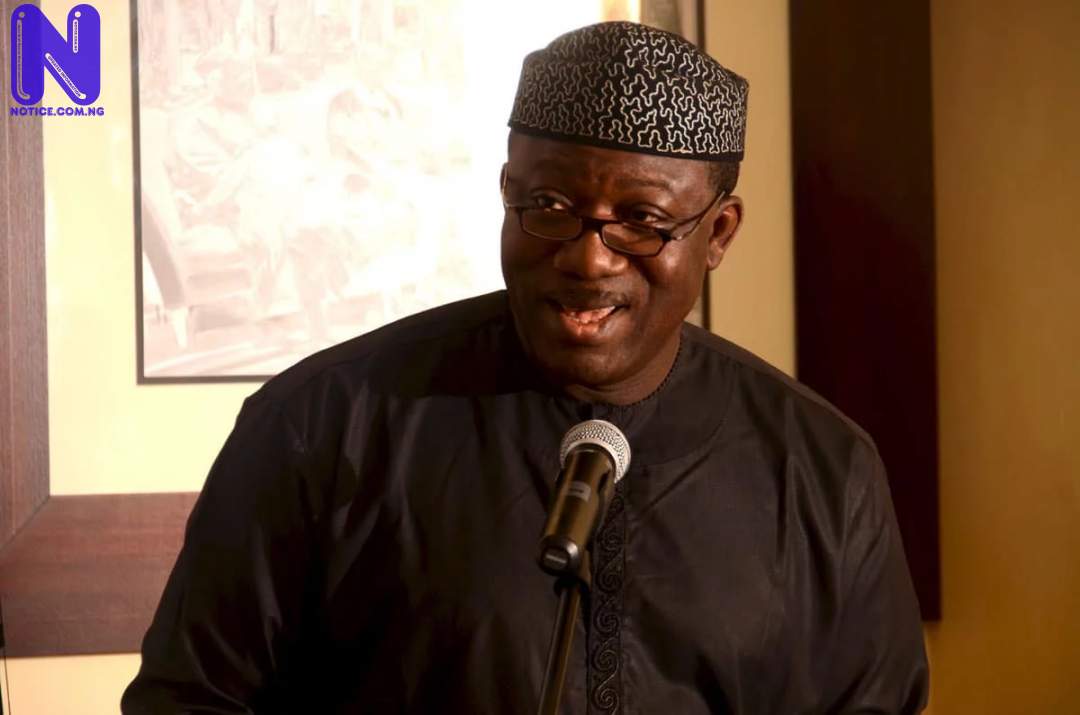 Ekiti State Governor, Dr. Kayode Fayemi, has charged the new Asaba of Isaba Ekiti in Ikole Local Government, Oba Olanrewaju Oluwaseun Adeyanju, to rule his subjects with fear of God as he ascended the throne.
Fayemi who gave the admonition on Thursday while presenting the new monarch with the instrument of appointment and staff of office urged him to operate an all inclusive administration to foster the town’s development.
Represented by the Deputy Governor, Otunba Bisi Egbeyemi, Fayemi enjoined the people of Isaba Ekiti to cooperate with their new king to make his reign peaceful, successful and impactful and lift the community to greater heights.
According to a statement by the Special Assistant (Media) to the Deputy Governor, Odunayo Ogunmola, the stool of Isaba of Isaba Ekiti became vacant following the demise of the late Oba Samuel Adesanya Oyebade of Ilao Ruling House on 15th October, 2018.
The appointment of Oba Adeyanju of Ijisun Ruling House as the 16th Asaba was approved by the State Executive Council at its meeting held on 15th September 2019 after fulfilling all requirements to ascend the throne.
Speaking at the presentation held at the Conference Hall of the Governor’s Office, Ado Ekiti in line with the COVID-19 protocols, Fayemi reiterated the commitment of his administration to always accord the traditional institution the pride of place it deserves.
Fayemi stressed that the government was opposed to any form of rivalry or competition that does not promote unity and progress.
The Governor said his administration was not unmindful of the vital roles traditional rulers play as agents of grassroots development in their different domains.
While noting that the various developmental programmes of his government have had positive impact in the grassroots, Fayemi lauded monarchs for their support for policies and projects so far executed in the state.
The Governor pledged the commitment of his administration to prioritise the welfare of the people and the development of all communities in the state.
Recognising the traditional institution as a “veritable agent of governance,” Fayemi noted that this was the reason why his administration has been ensuring the prompt filling of the vacant stools in line with the extant rules and regulations.
The Permanent Secretary, Bureau of Chieftaincy Affairs, Mr. Adeniyi Familoni, explained that the selection process of the new Asaba was keenly monitored with the extant rules and in line with the tradition of the people.
Familoni noted that the entire process leading to the selection of the new Kabiyesi was done without any rancour and his emergence was generally accepted by all sons and daughters of Isaba Ekiti.
In his acceptance speech, Oba Adeyanju said he accepted his appointment with humility and showered encomiums on the Governor for not interfering with the selection process.
The royal father also lauded Fayemi for approving the construction of Ikole-Isaba-Igbemo Road to link all farmsteads with the main town which has led to the establishment of a market on the road.
Oba Adeyanju used the forum to demand the construction of stalls and lock-up shops in the market to expand it and rural electrification to certain parts of the road to foster expansion and development of the town.
He canvassed the appointment of qualified indigenes of the community I to key offices at state and federal levels and utilisation of the vast expanse of land for agriculture, tourism and investment.
The Oba pledged to sustain peace in the kingdom and rally the locals for community development and support for government policies and programmes at all times.