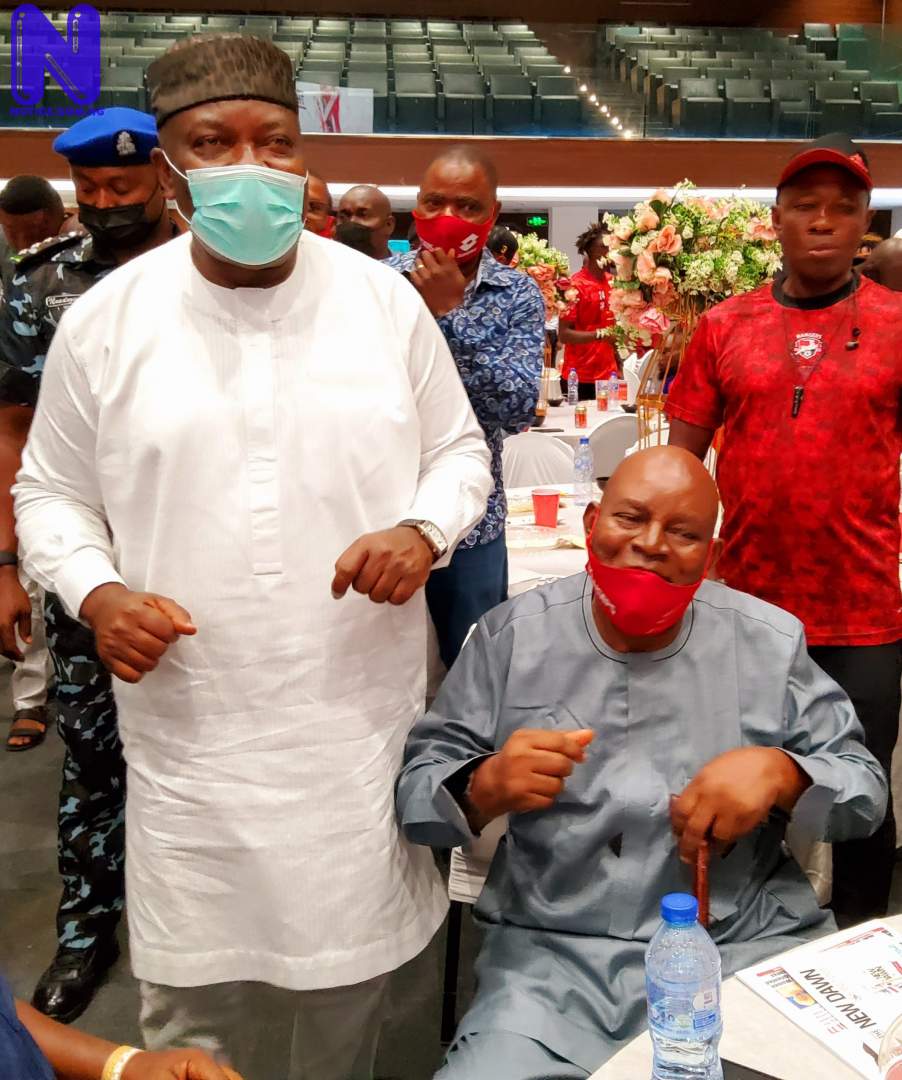 Fans of Enugu Rangers International Football Club, on Friday, paid glowing tributes to Governor Ifeanyi Ugwuanyi of Enugu State, for his sheer dexterity, resilience and mind-blowing achievements in revamping the club and returning it to its winning ways, within one year of his administration.

The enthusiasts, who spoke during the launch of “The New Dawn”, a book on Enugu Rangers International Football Club, written by Basil Ojengwa, at The Base Event Centre, Enugu, narrated with nostalgia how Gov. Ugwuanyi repositioned and gave maximum support to the club, which enabled it to win the 2016 Nigeria Professional Football League (NPFL) and the 2018 NFF/AITEO Federation Cup, after 32 years without winning a trophy.

Describing Gov. Ugwuanyi as a jinx breaker, the Rangers fans, said that the governor’s achievements, commitment and steadfastness in returning the club to its winning ways as well as other feats in the sports industry were legendary and unprecedented.

They added that lovers of Rangers football club all over the world are indebted to the governor for resuscitating the club’s ‘Never Say Die’ spirit, which As stated by them, was the pride of the Igbo man, after the Civil War.

Reviewing the book, the member representing Ezeagu Constituency in the State House of Assembly, Rt. Hon. Chima Obieze, highlighted that the author narrated “the contributions of a great leader (Ugwuanyi) who can best be described as a Peaceful Leader, Lover of Football, Silent Achiever and a Consensus Builder”.

Hon. Obieze added that “the author dedicated this book first to the Almighty God and then to the man God used to bring Rangers back to her winning ways, Rt. Hon. Ifeanyi Ugwuanyi”.

The lawmaker explained that the five-chapter book also dwelt on the evolution of football and football clubs, the advent of football in Africa as well as the metamorphosis of the name Rangers “through a military name used during the Nigerian Civil War”, among other narratives.

Emphasizing on Chapter four of the book, Hon. Obieze pointed out that it aptly captured the title of the book and the leadership role played by Gov. Ugwuanyi in ushering in “A New Dawn” for Rangers and her fans across the globe.

He stressed that “this underscores the position of our father, the Ex-Chairman of Rangers and Governor of old Anambra State, His Excellency, Sen. Dr. Jim Ifeanyichukwu Nwobodo who said in the book: ‘…Sadly, 32 years after I left as Governor, Rangers failed and failed until another Governor whose name is Ifeanyichukwu came into office and broke the jinx. I was very happy to see him turn the table again in favour of Rangers”.

In his address, Gov. Ugwuanyi who expressed delight at the event, said that he was evoked by “the reminiscence of the rich history and career trajectory of Rangers International football Club”, when he received the invitation for the book launch.

According to him, “I recalled that Rangers International football club is a football club like no other; formed in 1970 (immediate post-civil war period) in the then East Central State. This Club announced its arrival in the Nigeria Soccer space with the win of a national soccer competition and qualification for the African Cup of Champions Clubs.

“This unprecedented superlative entry behavior; a record no other club has set in Nigerian soccer history, underscored the legendary fighting spirit of the new Club. Little wonder, Rangers FC is reckoned as the “Pride of the East” and “Flying Antelopes”.

Noting that Rangers football club took a break from winning trophies for 32 years, Gov. Ugwuanyi said: “In 2016, with our modest efforts in resourcing and restructuring the Rangers Football Club while leveraging the sweeping goodwill of the Club as well as unwavering support of the teeming Rangers Fans, it pleased God to grant our darling club the Nigeria Professional Football League (NPFL) trophy.

“This was closely followed by the 2018 NFF/AITEO Federation Cup, consolidating Rangers International Football Club’s leadership of the Nigerian Soccer space. Note, once more, that these victories came after 32 years of quietude”.

The governor paid special tribute to the founding fathers of Enugu Rangers and all past leaders of Enugu State for their inestimable contributions in protecting and nurturing the great heritage of the state and entire South East region.

Gov. Ugwuanyi congratulated the author for undertaking the task of documenting and chronicling the Rangers’ story, saying that “Our administration appreciates his kind words for our humble accomplishments”.

“I laud the founding players of Rangers whose talents and industry laid the foundation for Rangers Football Club’s knack for victory. I acknowledge the Skipper Christian Chukwu, Goalkeeper Emma Okala, Aloysius Atuegbu, Ifeanyi Onyedika amongst others.

“I also appreciate all other younger generation of Rangers players who distinguished themselves in the field of soccer, locally and internationally, and contributed in defining the Rangers Football Club brand.

“I thank the teeming fans and supporters of the Rangers Football Club for their resilience and fidelity all these years”, the governor said.