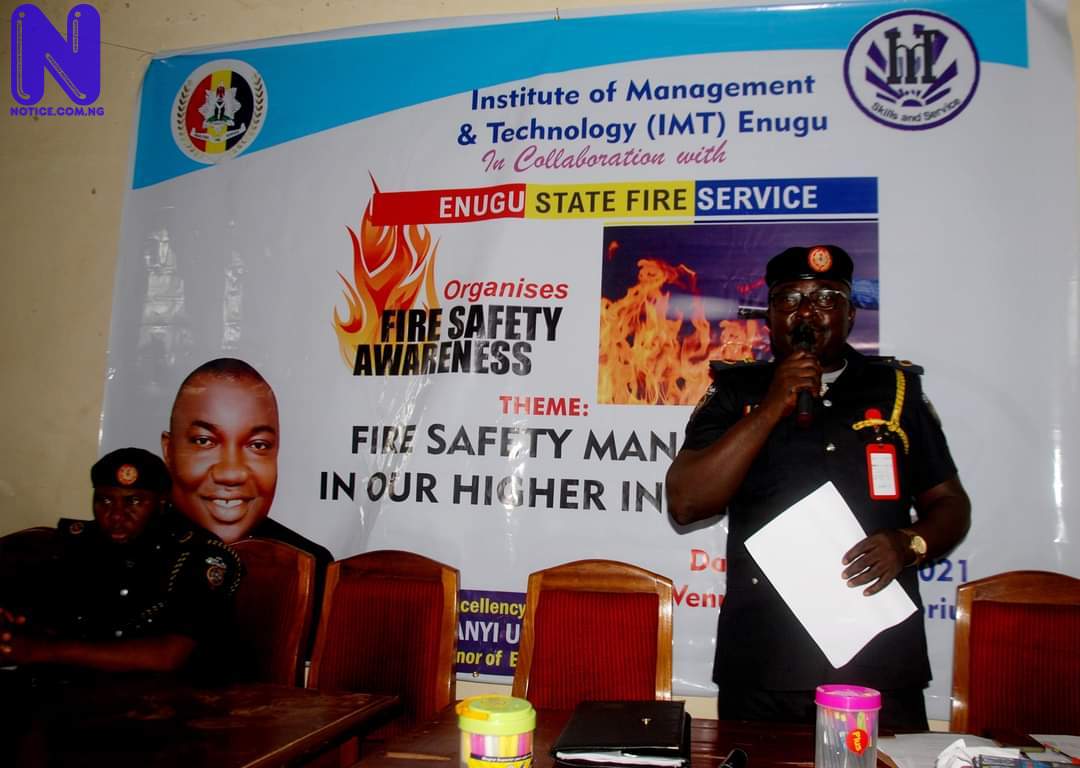 The administration of Governor Ifeanyi Ugwuanyi of Enugu State has embarked on a sensitization campaign in schools aimed at educating students and staff on ways of preventing fire outbreak.

The campaign, which is being organized by the State Fire Service, was flagged off at the Institute of Management and Technology (IMT) Enugu, yesterday, in collaboration with the management of the institution.

Speaking at the flag-off, the State Chief Fire Officer, Engr. Okwudiri Ohaa, disclosed that the campaign was in furtherance of Gov. Ugwuanyi administration's zero fire outbreak programmes in Enugu State.

Engr. Ohaa pointed out that the governor's war against fire outbreak is exceptional, adding that the essence of the programme was to educate the students and staff of IMT, Enugu "on the likely causes of fire, tips on how to prevent fire outbreak, and what to do in case the unfortunate incident occurs".

Reps to probe alleged ploy behind northern markets fire outbreaks The Chief Fire Officer, who highlighted the remarkable feats of Gov. Ugwuanyi's administration in the area of fire safety, stated that it established five new ultra-modern fire service stations across the three senatorial zones of the state after 56 years since the previous station was constructed.

"In capacity building, His Excellency (Ugwuanyi) left no stone unturned as he sponsored the Chief Fire Officer for training abroad at Fire Service College Motern in Mash London, UK. In 2019, another five (5) fire officers were sponsored for a national fire conference in Ilorin, Kwara State.

"He (Ugwuanyi) is the leading Governor in Nigeria to have installed fire extinguishers of various types and sizes in over 24 major markets in his state and other fire prone locations.

"His Excellency broke records again in the history of Enugu State Fire Service, as he provided Personal Protective Equipment (PPE) for the safety of all firefighters in the state".

In his speech, the Rector of IMT, Enugu, Professor Austin Nweze explained that the training was part of the initiatives of the school management aimed at supporting the state government's concerted efforts at tackling fire outbreaks for safety of lives and property of residents of the state.

Fire razes shops, properties worth millions at Katsina Central Market Professor Nweze applauded Gov. Ugwuanyi for his administration's steadfastness and sheer dexterity in managing and responding rapidly to incidents of fire outbreak in the state through various time-honoured interventions such as provision of the needed facilities and logistics for the effective operation of the establishment.

Delivering his lecture on causes of fire outbreak, a Fire Officer (FO1), Chika Ogbu advised the students and other participants to always pay attention to factors that may ignite fire and lead to inferno, stating that "Fire is a good servant but a dangerous master".