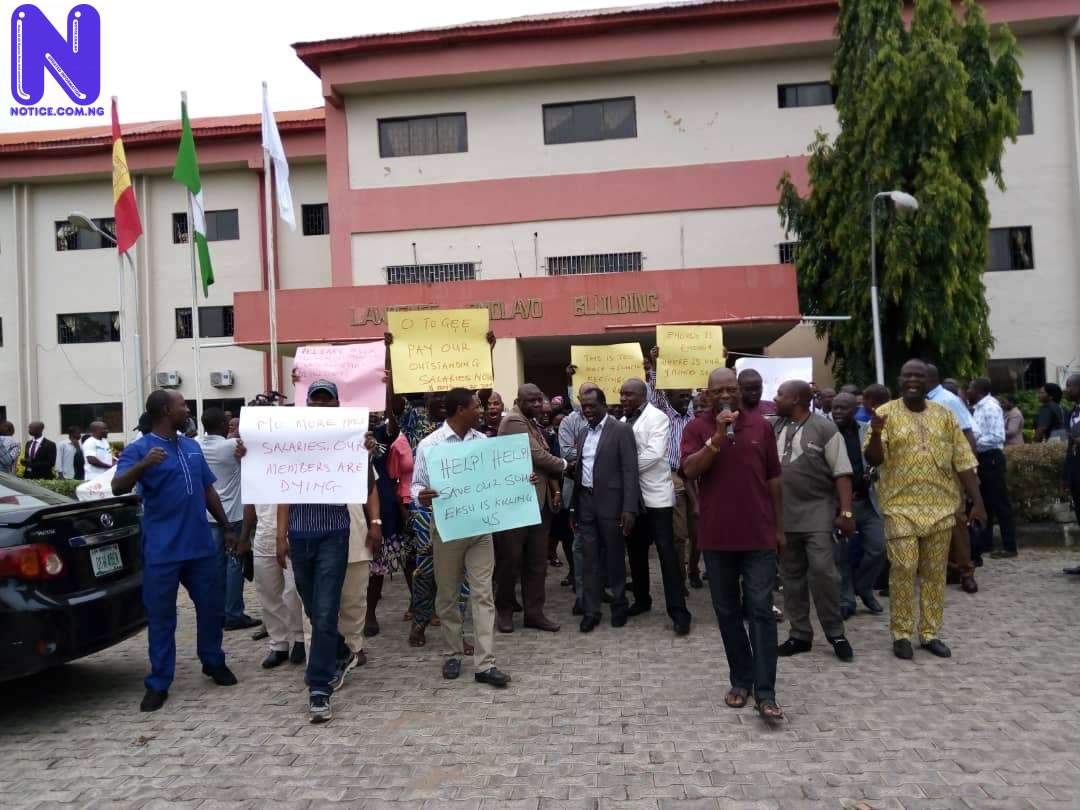 Some workers of Ekiti State University, Ado-Ekiti (EKSU), Monday staged a protest against the management of the institution over non-remittance of their 11 months’ deduction from their monthly salary to cooperative societies.

The protesters are both academic and non-academic staff, who were members of various cooperative societies on the campus.

The protesters, who moved from the institution’s Administrative Block at about 8:10 am proceeded to the Campus gate to express their grievances.

They were seen with various placards bearing their thoughts and agitations. Among which are “Enough is Enough”, pay our 11 months’ salary, “No more half salaries”, “Our members are dying”, “Help! Help! Save Our Soul EKSU is killing us”, “O to ge, pay our outstanding salary”.

Speaking with journalists during the protest on Monday, the President of Academic Staff Union of University cooperative society, Professor Awe Ariyo alleged that a deduction gulping 1.8 billion was not remitted to the cooperative societies’ account making it difficult to access the loan.

Ariyo said the management of the institution has no regard workers’ welfare, saying life has been difficult in the last three years.

He said non-payment of the deducted cooperative money had put the workers in shame as many of them, who depend on it, have had to deny themselves some basic necessities of life when they could not meet financial obligations.

“They have turned us to a pauper. And all our colleagues that are not doing the cooperative collect full salary. It is a sin to be frugal and send something aside to build a house, pay children school fees and buy a car.

“The problem we are having is that they are pretending to the government of paying full salary.

“Government gives them 260 million subventions whereas the wage bill is over 500 million. Instead of giving the true picture of how the wage bill rose to that level but they are pretending as if they are paying full salary.

“The Governing Council has decided to have a meeting with us but if the proposal is not acceptable, we would move en masse to the Government House to express our grievances.”

Also speaking, the Secretary of the Senior Staff Association of Nigeria Universities, Mr. Aguda Azeez noted that the workers are unbearably suffering while the management is enriching their pockets unfettered.

Azeez said the institution Governing Council under the chairmanship of Professor Bamitale Omole has derailed from its responsibility in ensuring effectiveness and efficiency in university’s administration.

“Omole-led Governing Council has been the most unproductive council we have ever had in this university.

“They have failed to look into the institution’s precarious financial situation but embarked on indiscriminate spending to their end.

“Without any noticeable development in the institution, Omole has succeeded in having five council’s meeting in just five months since it was inaugurated. And ordinarily, they supposed to meet four times a year. And each meeting consumes six million.”

” Fayemi should cross-examine activities of the council since they have been inaugurated whether it has been productive or otherwise”, Aguda said.

When contacted for reaction, the Public Relations Officer, Bode Olofinmuagun said the Governing Council is in a meeting to find a lasting solution to the issues as at the time of filing the report.