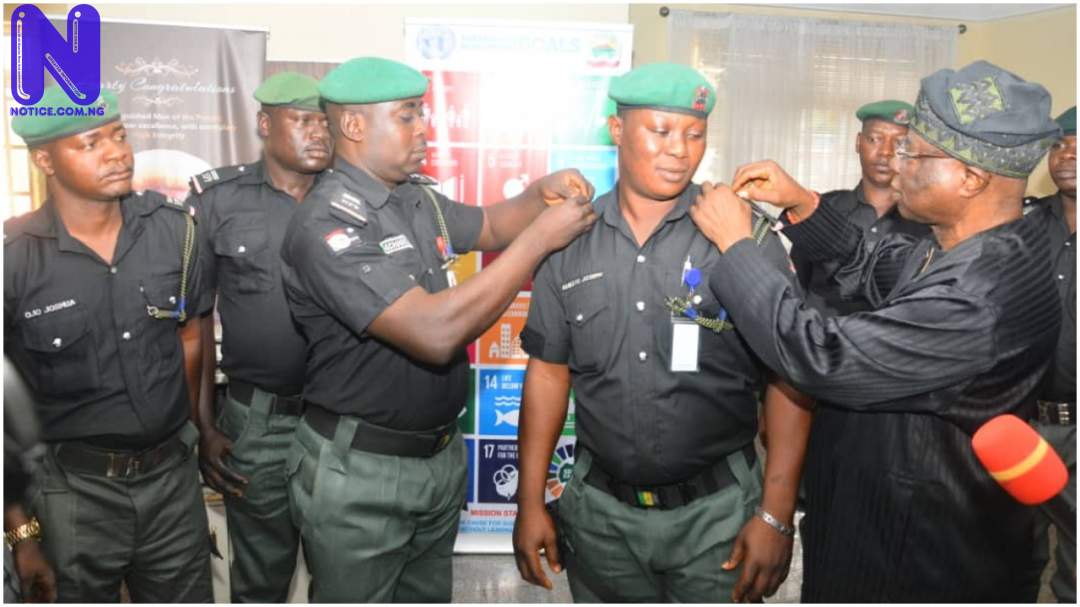 The Ekiti State Deputy Governor, Otunba Bisi Egbeyemi, on Thursday decorated ten officers of the Nigeria Police Force in his security team with their new ranks.
Speaking at a brief ceremony where he decorated the newly-elevated police officers, Egbeyemi described their promotion as well deserved and a reward for their dedication and commitment to duties.
According to a statement by the Special Assistant (Media) to the Deputy Governor, Odunayo Ogunmola, nine of the officers were promoted from the rank of Sergeant to Inspector while one was elevated from the rank of Corporal to Sergeant.
The Deputy Governor who was assisted in performing the decoration by the Convoy Commander, Inspector Ben Achigili, congratulated the beneficiaries on their elevation and charged them to be more dedicated to work.
Promoted from Sergeant to Inspector in the Deputy Governor’s security team include Oliseh Stanley, Adebayo Joseph, Edoka Nngbede, Femi Kehinde, Amuwa Olumide, Obanobi Ajayi, Ojo Joshua, Olatile David and Olaniyan Olabimpe.
The only officer in the team who bagged promotion from the rank of Corporal to Sergeant is Oladiti Abass.
They are among the 82,000 officers nationwide whose promotion were approved by the Inspector General of Police, Mr. Mohammed Adamu and endorsed by the Police Service Commission (PSC).
The promotion exercise cut across all units and divisions in the Nigeria Police Force while officers who lost their lives during the recent nationwide END SARS protest were also given posthumous promotion.
Egbeyemi who prayed for more career success for his police aides enjoined them to be honest and straightforward in the discharge of their duties.
The Deputy Governor noted that sky is the limit for anybody that is loyal, committed and hardworking in the performance of his duties.
He said: “I want to commend police officers working with me for your commitment, dedication and sacrifices at all times.
“I am happy that your sacrifice has been rewarded with promotion to your next rank which is a challenge to continue your good works and even perform better
“I congratulate you all and I pray that you will not die in service. You will retire successfully when the time comes and go back home safely.
“Always try to be honest because there is nothing better than honesty in life. Be straightforward in whatever you do and God will make you to shine more in your career.”
The Deputy Governor promised to treat the promoted officers to a get-together to mark their promotion at a later date.
Speaking after the decoration was performed, the Convoy Commander, Inspector Achigili, described the Deputy Governor as a father to the officers.
Achigili said: “The Deputy Governor is our father, and he took us as his children. He always prays that we get promoted, and we thank God that God has heard your prayers.”
He promised that the officers will be more committed to their duties to justify their new ranks and also add more value to the Police.