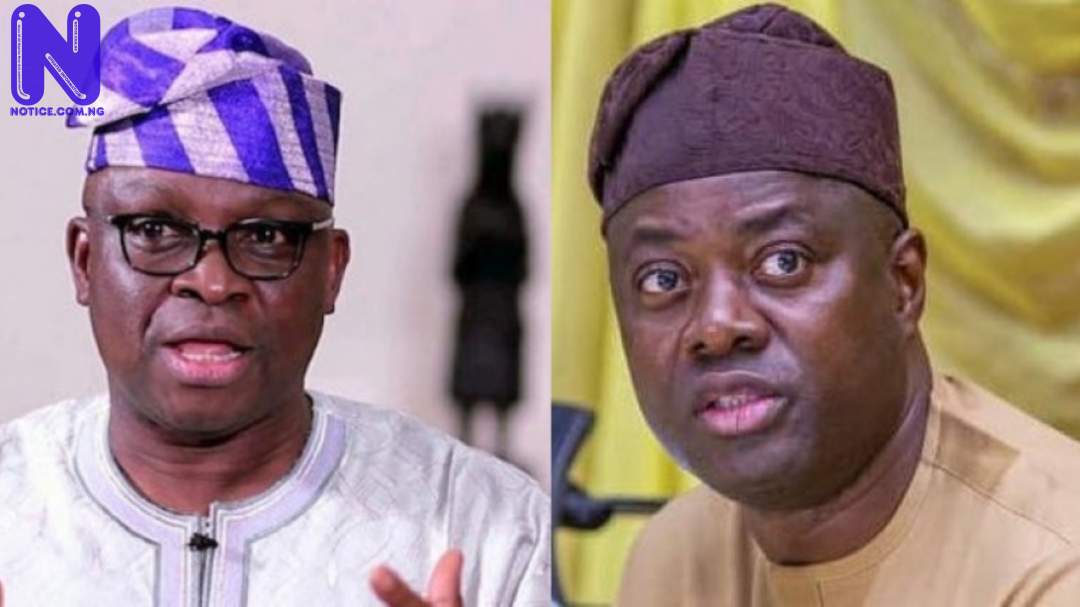 Ex-Ekiti State Governor, Ayodele Fayose, has warned the Oyo State governor, Seyi Makinde, to steer clear of the leadership of the Peoples Democratic Party, PDP, in Ekiti and other South West States.
Fayose made this known on Wednesday during a meeting of the National delegates of the PDP in Abeokuta, the Ogun State capital.
The meeting, which had in attendance, chairmen of the party in Ekiti, Osun, Lagos and Ogun, was held at the Ogun PDP secretariat, which was recently taken over by loyalists of Ladi Adebutu from those of late Buruji Kashamu.
Speaking at the South West zonal meeting, Fayose maintained that Makinde had no right to dabble into the local politics in each State of the South West.
The Ekiti ex-Governor acknowledged that Makinde is presently the only PDP governor in the South West, saying, in spite of that, that he should give every State the freedom to be governed by its local leaders.
Fayose said he will be ready to fight anyone who plans to take over the structure of the Ekiti PDP from him.
He revealed that there has been a cold war of who become(s) the executive members of the zone.
He alleged that Makinde demanded that the zonal executive should be dissolved for a caretaker committee, adding that since the caretaker committee came on board, Makinde “has not allowed them to function because he produced the chairman.”
While stressing that he would continue to respect the Oyo Governor as a brother whom he loves, Fayose stated that being a sitting governor does not give Makinde the right to go to another man’s State.
He said, “Nobody should come to my State; if you come to my State, I will face you squarely.”
The meeting, Press reports, was attended by Engr Deji Doherty, Sikirullahi Ogundele, Sunday Olatunde Akanfe and Bisi Kolawole says the PDP Chairmen for Lagos, Ogun, Osun and Ekiti states respectively.
In a communique signed after the meeting, the PDP in the South West resolved that no State chapter of the party should be ruled by another.
The PDP Chairmen said the existing zoning formula for the zonal executives of the party should not be tampered with.
They concluded that, “the Eddy Olafeso-led zonal executive only spent two years from November 2017 till date and should be allowed to complete the very credible job they’ve commenced in the South West.”
They emphasised that “the team must be allowed to complete its tenure.”