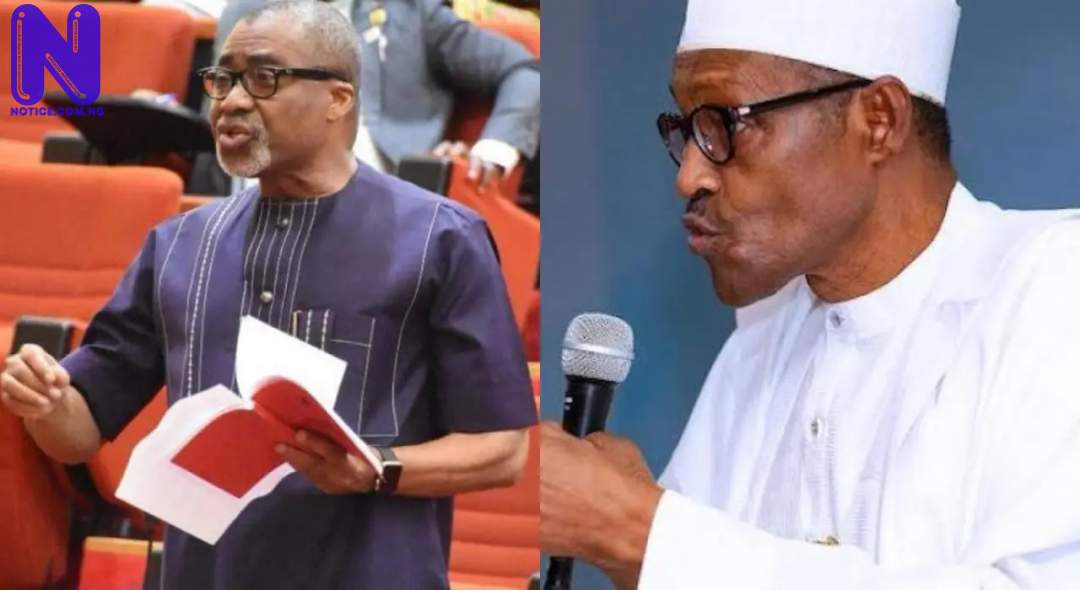 Stakeholders in Abia state have expressed mixed reactions on the call for the resignation of President Muhammadu Buhari by the Nigerian Senate Minority leader, Senator Enyinnaya Abaribe over escalating killings by terrorists in some parts of the country.

Press recalls that Senator Abaribe, representing Abia South Senatorial district while contributing to a debate on the deteriorating security situation in the country on the floor of the Senate last week, claimed that Buhari government had failed to proffer solution to the high rate of insecurity across Nigeria, calling for the president’s resignation.

in spite of that, reacting to the call during an interview with our correspondent in Umuahia, Donatus Nwankpa, the State Chairman of the All Progressives Congress(APC), blasted Abaribe, stating that the ex-Abia deputy governor lacked the moral standing to call for the resignation of Buhari.

Nwankpa recalled Senator Abaribe’s brand of politics, alleging that the federal lawmaker institutionalized violence in Abia politics while serving as the deputy governor.

His words, “Senator Abaribe lacks morals to make that comment. Abaribe brought violence into Abia politics. He introduced arm race, as a form of election in his Abia South Senatorial zone when he ran for the Senate.

“And everybody that knows Abaribe in politics, knows that he is never born into civility. So, for him to call on the President to relinquish his office is irresponsible.

“Abaribe was representing Abia South when the dreaded killer and armed-robber, nicknamed Osisikanwu, was a menace, he didn’t resign as Senator. He has represented a zone that is so much involved into criminality, and he has not made any categorical statement relating to it. I cannot recognize when he(Abaribe) made a statement on it.

“Does he have any record of performances that can make him comment on other people’s performances. The answer is zero. Because, they said, he who must go to equity must go with clean hands. Abaribe’s style of politics is characterized by banditry and thuggery. Check his political records, you will see it”.

Also speaking with newsmen, while reacting, a Second republic lawmaker and Elder statesman, Chief Joeffery Onyemaobi, urged the federal lawmaker to toe the path of law in demanding the President’s resignation.

Onyemaobi said, “Abaribe is the Minority leader in the Senate. He is playing his role as an opposition leader. I see nothing wrong with that. Senator Abaribe’s call is akin to passing a vote of no confidence in the government, until that is done by the parliament, it will not take effect.

“In a presidential system, the process of removing the President is contained in the Constitution, and until the parliament forms 2/3 majority, he cannot go. So, as far as I’m concerned, he (Minority leader) has not taken any step to remove the President that is not performing yet”.

On his part, Mr. Nwaka Inem, a businessman urged the Buhari-led administration to redouble it’s efforts in the fight against insecurity in the land.

He said, “To me, there is nothing spectacular about that call. The same Buhari made a similar call during Ex-President, Goodluck Jonathan’s administration when we were experiencing a ride in insecurity occasioned by the activities of Boko Haram.

“So, if the same situation made Buhari and fellow members of his party then to call for Jonathan’s exit, nothing stops any other person to ask him to resign because he(Buhari) has made a similar call. But, is natural if you are doing a job, and expected results are not coming up, people who are being affected directly or indirectly are likely to ask you to either brace up on the assignment or you allow another person to do the job”.

Continuing, he said “I think, there is nothing special about the call. The most important thing is for the President to be on top of his own game to make sure that lives and property are made meaning in Nigeria. For now, things are at the lowest ebb as far as security is concerned.

In his own reaction, Ex-Presidential candidate of the Green Party of Nigeria (GPN), during the 2019 general election, Chief Sam Eke, described Abaribe’s action as highly belated, asserting that a motion should have been moved firstly on the floor of the red chamber in removing Buhari.

The Abia-born political activist, opined, “Abaribe’s call is even too belated to my liking. The call should have come earlier than now. And at the same time, I am not expecting a call from somebody like Abaribe and I’m expecting a motion to be moved on the floor for an impeachment process of Mr. President.

“If you praise a hero, he will do more. What Abaribe said is what is manifesting presently in the country as regards to the security in some parts of Nigeria. But the fact is that they need to move a step further.”