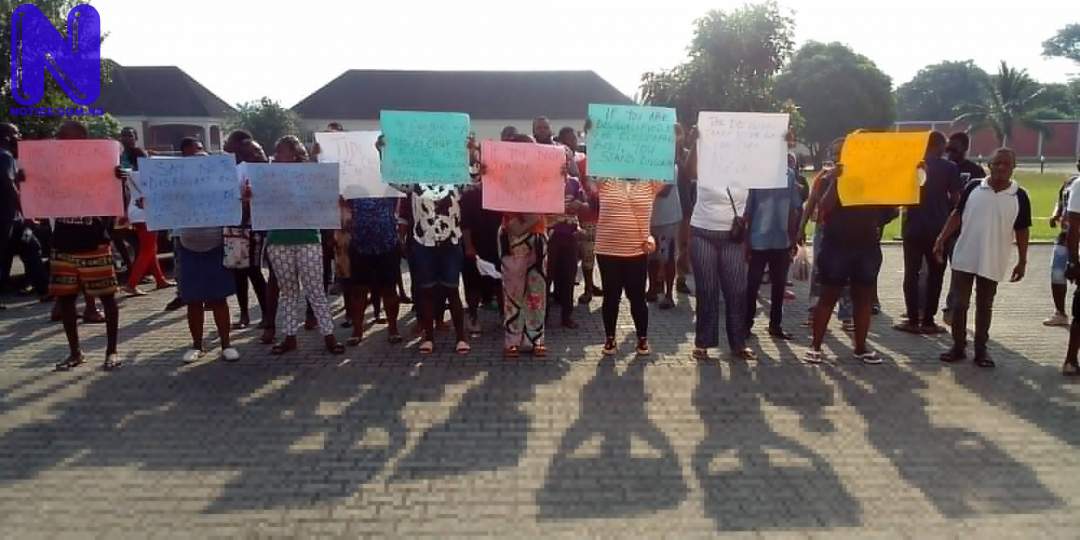 Youths of the Okere Community in Warri South Local Government Area of Delta State today staged a peaceful protest at the palace of the Olu of Warri Kingdom, HRM. Ogiame Atuwatse III, saying hoodlums are trying to frustrate the electoral process in the youth body of the community.

The youths chanted solidarity songs and marched from the community to the palace of the revered monarch.

The youths bore placards with inscriptions such as, “if you nor qualify, you nor qualify”, “if you’re disqualified by the electoral body, you stand disqualified”, “the decision taken by the electoral body must prevail”, “The Igieboro in Council led by Chief. E F. Esisi is the highest decision making body of Okere Community”, “Okere Community youth body get constitution”, “if you’re not a youth, stay away from Okere youth politics. You are our problem”, and Omo-Ologbo youth Association of Okere is strictly for youths from age 18-40″.

The youths also accused a group of allegedly trying to instigate a crisis within the community over the youth body’s election with their call for the reinstatement of persons who have been disqualified from the election.

They noted that the Ogieboro Chief E.F. Esisi had suspended activities to the elections.

The youths added that they would abide by the decision of the Ogieboro of Okere Community, Chief E.F. Esisi, and the elders’ Council of the Okere Community.

They warned that they would not tolerate any disrespect for the instructions of the Ogieboro or attempts to influence his decisions.

In a chat with newsmen, the current Chairman of Okere Community, Comrade Lucky Ogbolomo, disclosed that Ogieboro had suspended the activities for the conduct of elections into the youth body of Okere Community.

He warned that “nobody has the right to compell him to do otherwise.”

Ogbolomo, whose tenure ends on January 10, 2023, noted that he is not seeking tenure elongation or reelection into office. “I never begged for an extension, not even for one day.”

He accused a group identified as “Concerned Okere Indigenes” of attempting to frustrate the electoral process as well as cause problems within the youth body of Okere Community.

He said they petitioned his leadership before the Warri South Council Chairman, Dr. Michael Tidi, and the Nigeria Police Force, NPF, Warri Area Command, alleging that he was trying to cause chaos in the Community just as they threatened the electoral committee that there would be a “heavy violence” if they go ahead to conduct the election.

While noting that the Community’s Shrine is its constitution, Ogbolomo said it only accommodates persons between the ages of 18 to 40 years of age. As stated by him, “only these persons can cast their votes and be voted for.”

“The reason we are here is to make our stance clear to our prestigeous King,Ogiame, the only respected King worldwide.”

In response, the Olu of Warri Kingdom, HRM. Ogiame Atuwatse III, enjoined the Okere Community Youths to maintain the peace in the community with an assurance that the matter will be resolved amicably in no distant time.

The Secretary of the Okere Community Youth, Comrade Besidone Jonathan Eku, and Ebona Tuoyo, were among the peaceful protesters at the palace today.