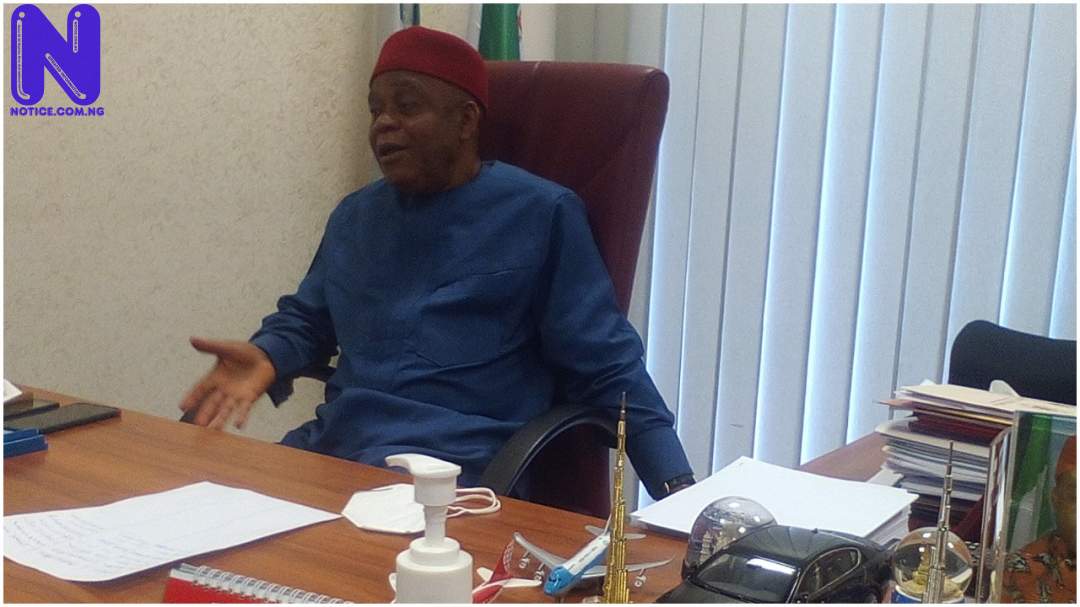 Senator representing Abia Central Senatorial District and two time Governor, Theodore Orji has said Nigeria should restructure, if it must overcome its multiple challenges.
Speaking with journalists in Abuja, he said the current federal arrangement is not only unworkable, but has outgrown its usefulness, a situation that has led some sections and zones to feel cheated.
He said agitation for restructuring was the brain behind the calls for secession and End SARS protests as a result of frustrations of the people, adding that government must call dissidents to a round table discussion, if there must be peace.
He explained that voices of those considered dissidents have been loud and long enough for government to listen, including the Indegenous People of Biafra (IPOB), noting that if government continues to pay deaf ears in pretence, they continue to give problems by distracting governmentÆs programmes.
He stressed: ōThe advice is already on the table and that is restructure. If there are dissident voices, call them and discuss with them and find out how you can bring them in and that is what will solve the problem we are facing now. Restructuring is what everybody is shouting.
ōThe resources is coming from somewhere. You are producing and you are not getting enough, will you keep quiet? You will be shouting every day. You see the people of Niger Delta shouting every day.
ōWe should restructure with resource control with all those areas, we know the area that are sensitive. Call the dissidents to a conference and discuss with them.
According to him, ōthere is nothing bad in discussing with IPOB. If you donÆt talk with them, they will continue to give you trouble. You discuss with them.
The lawmaker lamented the uncooperative attitude of some citizens to the Parliamentarians while they were working to make laws in the interest of the nation.
He recalled that in the 8th National Assembly, Senators were so criticized that they were almost rendered worthless, stressing that being a legislator was not all about opposing governmentÆs position on issues.
Dismissing opinion of certain persons in the society who described the 9th Senate as ōrubber stampö, Orji explained that as an opposition lawmaker, he understands that the ruling All Progressives Congress (APC) under Dr. Ahmad Ibrahim Lawan leadership must balance political interests.
He noted that some citizens have bad impression about lawmakers, that they constantly heap insults and attack on them, particularly Senators.
ōOf course, we are trying our best and there is nothing you do that Nigerian People will not criticize you. In the 8th Senate, there were also criticisms.
ōThey criticised us to the extent that they almost rendered us worthless. There is nothing you do that is appreciated, even when you are doing your best in the interest of the county, you see some people sitting outside saying they are eating all the money.
ōYou remember what happened during the End SARS protests, is it not the Senators that are being attacked? So, the legislature is there for checks and balances and when you are doing that job, there must be problems.
ōBut you know the Executive has a bigger hand such that when you make a law, and they refuse to executive, it becomes worthless. There are many laws that we have made that were not executed.
ōItÆs the Executive that gives teeth to what we do. You get a legislature and say itÆs a rubber stamp. No legislature is a rubber stamp.
ōPolitics in Nigeria and elsewhere, Senate President belongs to a party and there are many interests he has to protect. That he is now the Senate President, he would be anti-party? Nobody will do that. If they meet you and say letÆs do it this way and if they donÆt consult you, meet them and say letÆs do it this way in the interest of peace.
ōThere are many parties like in the House of Representatives, APC, PDP, APGA and others are there. So you have to balance interests which is not easy.
ōThey think if you are in the House of Representatives, you are there to oppose anything government does. At times when they bring good idea, you have to support and the good idea may not go down well with the people, but with time, they realise that it is good.
But when it first came, they said no. All these Senators forgetting that there is no Senator who is below forty, which means, he has one experience or the other before becoming a Senator.ö