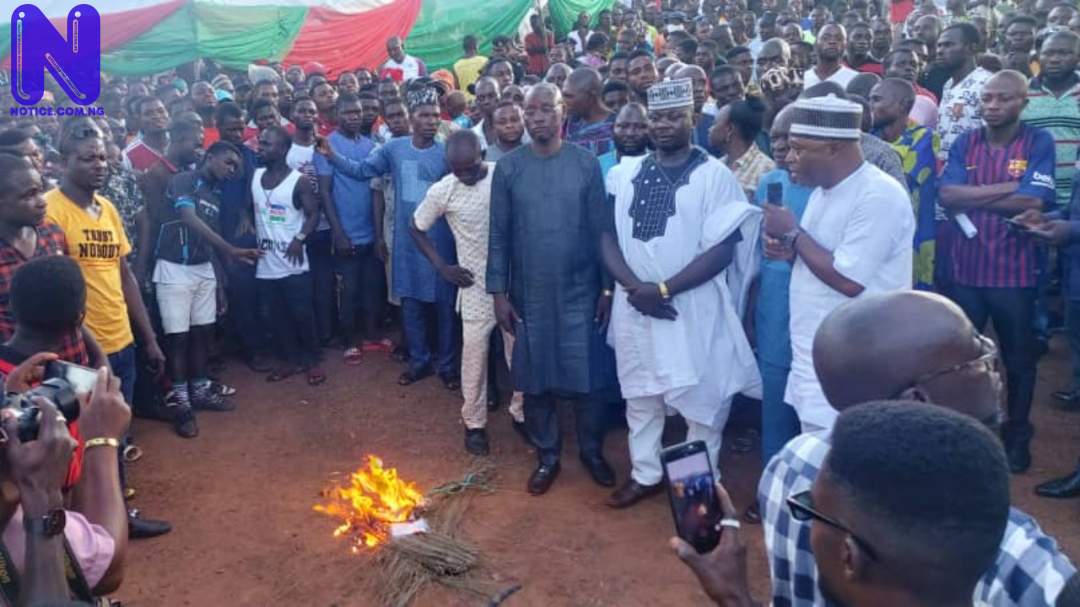 No fewer than 2,500 supporters of the All Progressives Congress (APC) defected to the ruling Peoples Democratic Party (PDP) in Tarka local government area of Benue State on Friday.
Tarka is the country home of leader of the APC in Benue and Nigeria’s Minister of Special Duties and Inter-Governmental Affairs, Senator George Akume.
A statement signed by the State Publicity Secretary of the PDP, Mr. Bemgba Iortyom said the decamping ceremony took place as the State Working Committee of the Benue PDP led by State Chairman, Sir John Ngbede, inaugurated the Local Government Area Executive Committee of the party in Tarka.

“Leader of the defectors, Elder Ahine Anivungu, sounded jubilant as he declared his avowal and that of the thousands with him to work hard to ensure PDP emerges victorious in coming elections in the area”, the statement read.
The statement said Elder Anivungu pointed to the absence of positive impact by APC in Tarka, despite the leader of the party in the State being from the area, stressing that every developmental milestone there was to the credit of the PDP.
State PDP Chairman, Ngbede, while receiving the defectors into his party, assured them of equal rights, charging them to join hands and work for the progress of the party in the area.

Ngbede stated that the political reality in Tarka is that, “while PDP enjoys the majority support of the electorate there, APC leaders have always resorted to violence to manipulate elections in their favour”.
He charged the newly inaugurated local government executives, the new entrants and members of the party in the area to close ranks and ensure their majority status translated into victory at subsequent elections.
“Newly sworn in Tarka PDP Local Government Chairman, Aondoakaa Yayough, on behalf of the new Exco, pledged to work with all stakeholders and members of the party in the area to achieve success.
“Various speakers at the occasion, including, Rural Development and Co-operatives Commissioner, Victor Ukaha; Special Adivsers, Joyce Tarka and Emmanuel Manger; 2019 Gboko/Tarka House of Representatives PDP Candidate, Bernard Nenger, Elder Dr. John Allagh and PDP State Vice-Chairman for Zone ‘B’, Mbakorlumun Chia, all drummed support for the new Exco, promising to work as a family for dominance in the area”, the statement added.