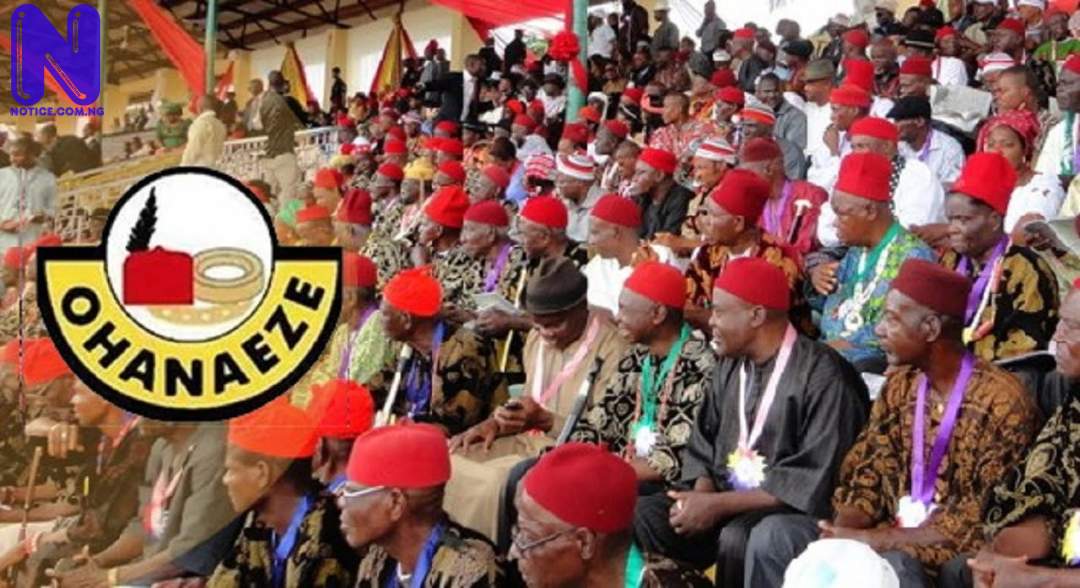 Press reports that this is not the first time the Igbo organization is coming under public scrutiny for such allegations.

In some previous presidential polls, members of the organization had also been accused of collecting money running into billions of naira from presidential candidates.

In 2019, Ohanaeze endorsed Alhaji Atiku Abubakar in spite of stiff opposition from members of the All Progressives Congress, APC, from the South-East zone. The development led to a sharp division in the group.

This time, in a social media video clip making the rounds, it was alleged that the Igbo group demanded payments from one Comrade Kennedy Iyere as a condition to support a Nigerian Presidential candidate from the South East.

Mr. Peter Obi of the Labour Party is a key presidential candidate from the South-East zone.

Some unnamed Ohanaeze leaders were said to have demanded money as a condition to participate in a meeting for a facilitation of Nigeria president of Igbo extraction.

However, the spokesman of the Professor George Obiozor-led Ohanaeze, Chief Alex Ogbonnia has rubished the claims, noting that the Ohanaeze had always been at the forefront of the push for a South-East presidency.

He went ahead to express regrets for the group's support to the presidential candidate of the Peoples Democratic Party (PDP), Atiku Abubakar, in the 2019 general elections.

He added that the current travails being faced by Igbos were caused by their support for Atiku then, who incidentally is currently the presidential flagbearer of the PDP.

Ogbonnia dismissed the bribery claim as the most "fallacious, mendacious and callous of all the falsehoods aimed at tarnishing the image of the Igbo as the Judas category that values money more than human conscience."

According to him, the Ohanaeze Ndigbo took the advocacy for a president from the South East of Nigeria to all parts of Nigeria, including Ex-President Olusegun Obasanjo, the Sultan of Sokoto, His Eminence, Muhammadu Sa'adu Abubakar III; Chief E K Clarke, Chief Ayo Adebanjo, Ex-President Goodluck Ebele Jonathan, the British High Commission and so many other places.

While insisting on president of South East extraction, he restated that he wrote to Atiku to remind him that their support for him in 2019 was the cause of the current travails of the Igbos.

"I also wrote to Alhaji Atiku Abubakar, reminding him that the current Igbo travails are as a result of our support to his candidacy in 2019. A simple search on the internet will reveal that Ohanaeze had made numerous press releases urging Nigerian People and the international community to lend support to the quest by the South East for presidency.

"On December 13, 2021, I personally addressed an Open Letter to Asiwaju Bola Tinubu, reminding him that it is the turn of the South East to produce a president for Nigeria and urging him not to contest the 2023 presidency on the grounds of equity, justice and fairness.

"The Ohanaeze Ndigbo further propagated the advocacy to the Southern and Middle Belt Leaders (SMBLF) led by Chief E K Clarke, and Chief Nnia Nwodo as the Coordinator General. Other leaders of the SMBLF include Chief Ayo Adebanjo, the Leader of the Afenifere; Dr Pogu Bitrus, Leader, Middle Belt Forum, among others. Our gratitude goes to the SMBLF for their irrevocable position to support an Igbo of the South East for presidency in 2023. Similarly, we thank Chief Olusegun Obasanjo for receiving us in his Abeokuta residence about three times.

"In the social media clip making the rounds, orchestrated by one Comrade Kennedy Iyere, he alleged that the Ohanaeze Ndigbo led by Chief Nnia Nwodo demanded payments from him to attend a meeting at Awka for a Nigerian president from the South East.

"The truth of the matter: In October 2020, Chief Damian Okeke Ogene, Ex-President of Ohanaeze Ndigbo, Anambra State chapter was contacted by Chief Iyere to invite the seven state presidents from the seven Ohanaeze States.

"Ogene explained to Iyere that members would be coming to Awka from distant places such as Port Harcourt, Owerri, Aba, Ebonyi and that it would not be possible for them to go back to their locations on the same day. Iyere promised to secure hotel accommodation for the seven persons, and that he would also pay for their transport costs.

"At the meeting in one hotel at Awka, Iyere was seated with White men and he highlighted the unbearable injustice to the Igbo by the past Nigerian leaders and the equity in a South Easterner to become the president of Nigeria come 2023."

"Paradoxically, we were very delighted and also curious that a non-Igbo and White men were championing an Igbo cause. At the end of the meeting, he pleaded with us to manage seventy thousand naira (N70, 000.00); that is, ten thousand naira each, as transport costs.

"Some of us refused the money, while some others reasoned that it could be misinterpreted if we rejected the N10,000 each. I am rather shocked by the depravity and a kindergarten shenanigan with which Iyere painted his encounter with the Ohanaeze Ndigbo; that Ohanaeze Ndigbo demanded payment from him in order to support an Igbo for presidency," he said.