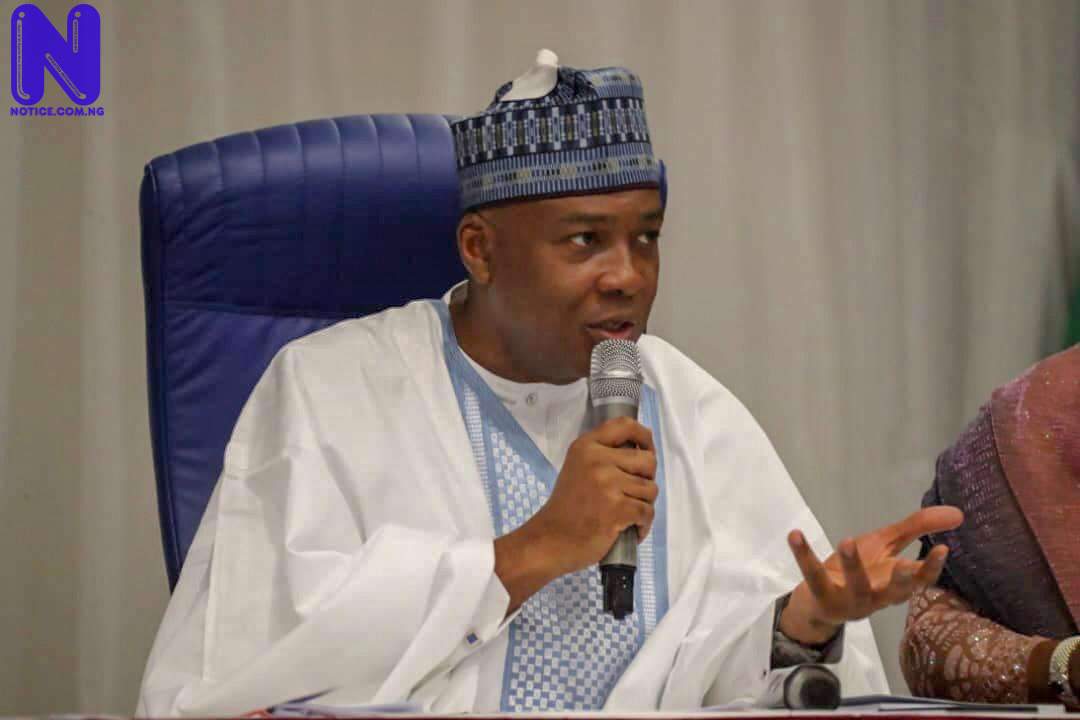 Bukola Saraki, President of the 8th Senate, has condemned the “unenlightened propaganda” by Professor Ishaq Akintola, Director of the Muslim Rights Concern (MURIC).
A statement by Saraki’s media aide, Oluwole Onemola had recalled an accusation against Saraki by MURIC, alleging that the 8th Senate worked against Buhari on insecurity.
MURIC had claimed the 8th Senate rejected the President’s request for $1 billion for the purchase of arms.
However, Saraki condemning MURIC’s claims explained that the 8th Senate never rejected any funding request for security but had insisted that due process provided by the constitution be adhered to, even by the executive.
Onemola also recalled that on April 25, 2018, Saraki read a letter from Buhari, which stated that he had granted ‘anticipatory approval’ for the release of $496,374,470. These were said to have been paid directly to the Treasury of the United States government.
The statement said the powers of such appropriation are specifically conferred on the National Assembly in Sections 80 to 84, adding that the principle of ‘anticipatory approval’ is not recognized by law,
“This means that Mr. President did not follow the proper procedure during this constitutionally-flawed and thoroughly unprecedented ‘anticipatory approval.’ Still, the National Assembly went ahead to approve the money that the executive has started disbursing without approval. Thus, $1 billion was approved by the 8th National Assembly.”
Onemola reminded Nigerian People that based on allegations of human rights violations by the military, there was a U.S. Government ban on the sale of offensive equipment to Nigeria in compliance with Leahy’s Law.
“However, it was only after the U.S. Congressional Delegation met with the Nigerian National Assembly delegation in Nigeria on Monday, August 28th, 2017, that reassurances were made by the Nigerian Senate President on behalf of the National Assembly – that the Nigerian National Assembly delegation promised that it would look into the allegations of human rights violations, and work to prevent any future recurrence.”
He noted that to ensure that the Nigerian Armed Forces were properly equipped, the 8th Nigerian Senate invited the Service Chiefs on several occasions to discuss funding for their operations.
Onemola gave instances of February 3rd, 2016, when the leadership of the Senate and chairmen of committees relating to security agencies held a meeting with heads of the military;
“On the 8th and 12th of February, the Senate held a special security summit attended by the Service Chiefs, the NSA, and Vice-President, Yemi Osinbajo, and other key stakeholders in the national security architecture and the international community to discuss the security situation in the country;
“On the 23rd of May 2018, when the Senate asked the National Security Adviser (NSA) and the Service Chiefs to present it with its funding requirements — giving our armed forces an almost ‘blank cheque.’ This Security Summit came up with a 21-point recommendation which was subsequently forwarded to the Presidency for implementation.
“The 8th Senate considered over 101 security-related motions/point of orders in 4-years; The 8th Senate referred 57 security-related matters to its relevant committees;vThe 8th Senate decided 42 security-related matters on the Senate Plenary floor;vThe 8th Senate had 38 security-sector interventions in the form of Bills.
It also held 14 public/investigative hearings on security-related issues over its 4-year tenure.”, the statement added.