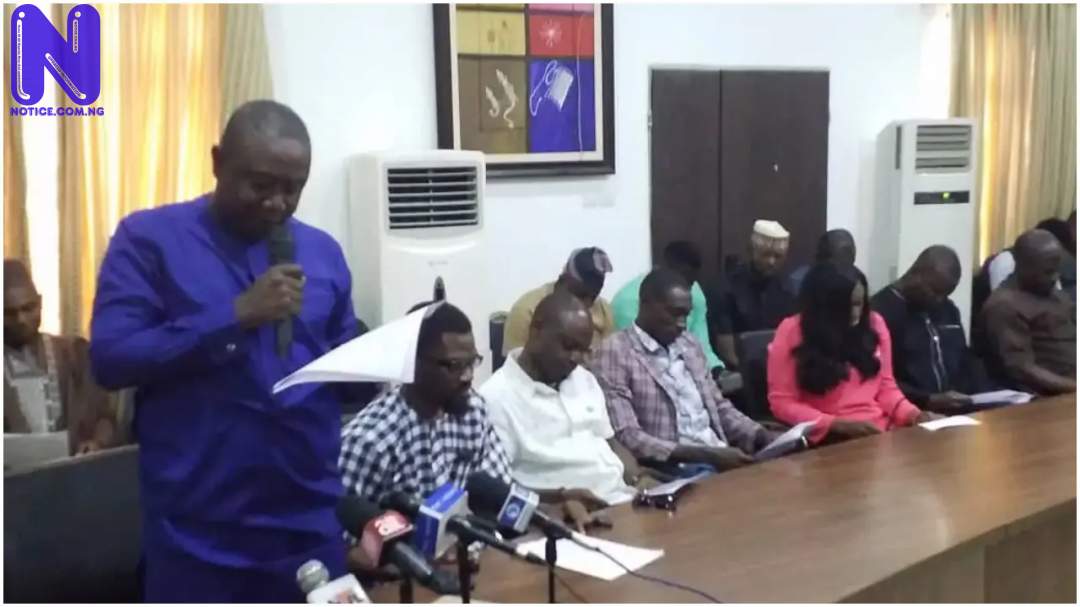 The Benue Youth Forum, BYF, has issued a stern warning to herdsmen in the State on the aegis of the Miyetti Allah Koutal Hore.

The youths also called on the international community to beam its searchlight on Benue to unravel and prevent the organised attacks on communities by the Fulani organisation.

BYF was reacting to recent outburst by the President of Miyetti Allah Koutal Hore Abdullahi Bodejo where he stated that the group will never apologize to anyone for the killings.

Bodejo was also quoted to have threatened that Benue people will know no peace until the Open Grazing Prohibition and Ranches Establishment Law is repealed.

BYF in a press conference by its National President, Kuanum Terrence, in Makurdi, the State capital on Wednesday, said, “On the 26th of October 2019 Saleh Alhassan, the National Secretary of Miyetti Allah Koutal Hore attended a wedding in Makurdi and publicly apologized to the Executive Governor of Benue State Samuel Ortom over the killings of Benue indigenes by their members on the 1st of January 2018 when they invaded our ancestral homes.

“The public apology was wildly televised and circulated by both national and international media positing that members of the group would henceforth respect the Open Grazing Prohibition and Ranches Law of Benue State.

“Expectantly, the conquest agenda of the Miyetti Allah Koutal Hore and other Fulani violent groups which stated clearly during their Abuja press conference of 30th May 2017 could not be hidden for so long.

“The publication in Saturday Sun of 2nd November 2019 saw the President of Miyetti Allah Koutal Hore Abdullahi Bodejo stating that the group will never apologize to anyone for the killings. He also went ahead to threaten that Benue people will know no peace until the Open Grazing Prohibition and Ranches Establishment Law is repealed.

“Benue State’s opposition to open grazing which angered the herdsmen to invade the land and kill hundreds of innocent people has remained unchanged. OUR RESOLVE TO SAY NO TO IMPUNITY WILL NEVER BE COMPROMISED NO MATTER THE AMOUNT OF THREATS FROM MIYETTI ALLAH GROUPS AND OTHER FULANI SOCIO-CULTURAL ORGANISATIONS.

“The agenda of these groups is anchored on conquest of more lands for their cows. In order to carry out the occupation plot smoothly, they have strategized that the best approach is to destabilize Governor Samuel Ortom’s government. This explains the unwarranted provocation which started with an apology from the Secretary of Miyetti Allah Koutal Hore quickly followed by the denial and threat from President of the group, Bodejo. A direct implication of the orchestrated plan was to ambush Governor Ortom at his in-law’s wedding and pretend to apologize.

“Having lost abysmally in the ambush on the Governor, they have resorted to granting press interviews and openly threatening our people so they would have the opportunity to create unnecessary tension and crisis in the state.

“The good thing is that Governor Ortom has restated his commitment to implementation of the Open Grazing Prohibition and Ranches Establishments Law. This is our firm stand too.

“The entire Benue State is fully mobilized to defend its laws and land against any threat posed by members of Miyetti Allah Koutal Hore and any other violent group. We are a peace loving and law abiding people but our peaceful and hospitable disposition should not be taken as fear or lack of courage. No part of Benue will be given to enemies of the state.”

“We are solidly behind Governor Samuel Ortom and his administration to continue with implementation of the ranching law of the state. Those who want to rear livestock in Benue State should do so by ranching the animals.

“The Federal Government through the National Emergency Management Agency, NEMA should immediately rehabilitate the over 200,000 people in various IDP camps to enable them return to their ancestral homes.

“The N10 billion Federal Government promised to release for resettlement of those affected by the crisis is yet to be actualized. The Muhammadu Buhari administration should fulfill its promise now to avoid further hardship on victims of the herdsmen attacks in Benue State.

“The Benue Youth Forum will not withdraw its cases against the Miyetti Allah groups for the genocide they carried out in Benue State until justice is seen to have been done to our people.

“We urge the Inspector General of Police and DG of DSS to immediately arrest the leadership of Miyetti Allah Kautal Hore as chief sponsors of violence in Benue State.

“The international community is hereby invited to beam its searchlight on Benue to unravel and prevent the organised attacks on our communities by Miyetti Allah Koutal Hore and other violent Fulani groups,” he said.