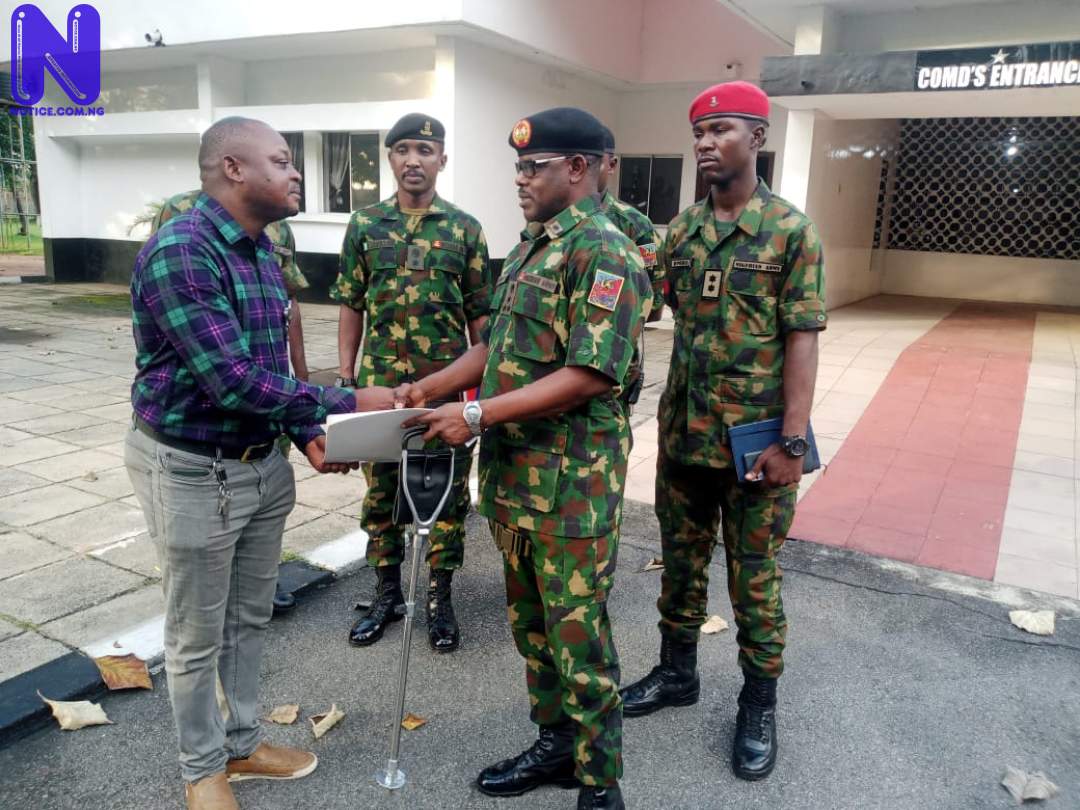 The Nigerian Army has handed over two suspected child traffickers and an eighteen-month-old rescued victim to the National Agency for the Prohibition of Trafficking in Persons ((NAPTIP).

The Commander 34 Artillery Brigade of the Nigerian Army, Obinze, Owerri, Brig.-Gen. Sani Sulaiman performed the handover at the Brigade’s barracks on Thursday.

Sulaiman said the suspects, Mrs Favour Amaegbula from Rivers, Miss Joy Duru from Ideato South council area of Imo and another who pleaded anonymity, were arrested on September 14 after intelligence reports confirmed their locations.

He said his officers discovered indicting evidence in the custody of the suspects, such as signed documents indicative of child trading.

According to him, Amaegbula perpetuated the crime in the guise of running an orphanage, where she bought children from kidnappers at the rate of N500,000 and resold them to persons in need of children at the rate of N700,000.

He called on residents of Orlu, Nkwerre and Ideato South council areas of Imo whose children were missing to contact the Nigerian Army for their possible identification and collection.

” On July 24, Joy Duru stole a baby and later sold it to Amaegbula who runs a so-called registered orphanage where we found a heavily pregnant girl waiting to put to bed and sell to her.

“Duru was arrested with four children aged 12, seven, three and a year and half respectively.

” Our aim is to protect the lives of these victims, reunite them with their parents and hand the suspects over to NAPTIP for prosecution because we are not a prosecuting agency “, he said.

Receiving the suspects, the NAPTIP Commander in Imo, Mr Ernest Ogbu, thanked the Army for facilitating the arrests and said the suspects would be “duly investigated and prosecuted”.

He urged Imo residents to support the agency with vital information that could lead to the arrest of human traffickers as well as necessary logistics to assist the agency in the discharge of its duties.

Duru, a suspect, confessed to stealing two of the children, one from the premises of the St John’s Anglican Church in Nkwerre council area and the other from Okwelle in Onuimo council area of Imo and later sold them to Amaegbula.

Mr Kenneth Osuoha, father of the 18-month-old victim, and his wife, Cynthia, were, in spite of that, on hand to identify and claim their son amidst tears of joy.

He thanked the Nigerian Army and NAPTIP and promised to be more careful with the whereabouts of their son.