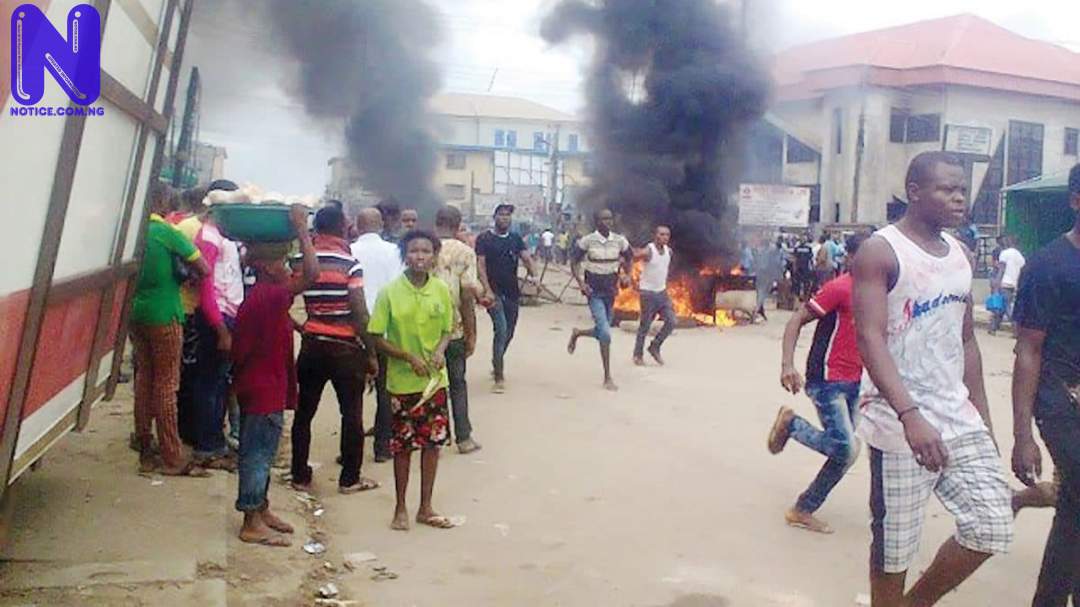 An angry mob in Yenagoa, Bayelsa State on Tuesday descended on a middle-aged woman and almost killed her, following the alleged stabbing to death of a 14 years old boy, Joseph Thomas, along the Genesis street off Okaka road.

The incident, which occurred at about 7.30am on Tuesday morning, threw the neighbours into shock.

Press, gathered that the quick arrival of the Patrol team of the Bayelsa State Police Command rescued the woman from the jaws of death.

Some eyewitnesses told Press that the accused woman is believed to be deranged and had attempted to stab another boy a few meters away from where she allegedly committed the murder.

He stabbed the other boy in the arm along the mountain of fire road, Okaka before proceeding to kill her victim.

“But on this particular day, she was usually carrying a bible and started displaying strange behaviours by displaying a Dagger. She chased everyone that came across her. Until she got to the victim’s house and broke down the door.

She dragged the boy to the middle of the road and stabbed him three times. Angry youths on the street started retaliating by attacking her with stones and planks until she fell down. And the police came to her rescue before they finished her off.

The Grandmother of the deceased, Madam Modlyn, who narrated the incident said her grandson was in the house when he was accosted and allegedly killed.

“I went to buy something. I was at the place when someone told me that a mad woman is looking for me and wanted to kill me. I wondered why a madwoman would be looking for me. I ran into my neighbour’s house to seek refuge and avoid the woman. While at the neighbour’s house, I heard noise from neighbours that she had stabbed my grandson to death”.

Also speaking, a neighbour of the deceased who preferred anonymity said she was preparing her children for school when the incident occurred,”’ I was bathing my children in preparation for school before the victim’s grandmother started shouting to alert residents that a deranged woman is coming into the street with a dangerous weapon. So, I ran inside and locked the door. The woman forcefully entered and stabbed the boy.”

The President of the Do Foundation, a group involved in the civil advocacy against domestic violence and violence against children in the state, Barr. Dise Sheilla Ogbise, expressed anger against the killing of the 14 years old, “we are interested in this case and it must be further investigated. A woman just lost her son and relations of the accused woman are already raising the defence of insanity. We are not convinced that she is insane”.

“No Doctor has confirmed it and there is no evidence backing the claim of insanity. This is a clear case of murder except proven otherwise. Let the Bayelsa Police thoroughly investigate the matter”

The spokesman of the Bayelsa State Police Command, Asinim Butswat, who confirmed the development, said the police authority has the woman in their custody and have arranged extra security for her at the hospital to forestall the plot to kill her on the hospital bed in retaliation for killing the boy.”