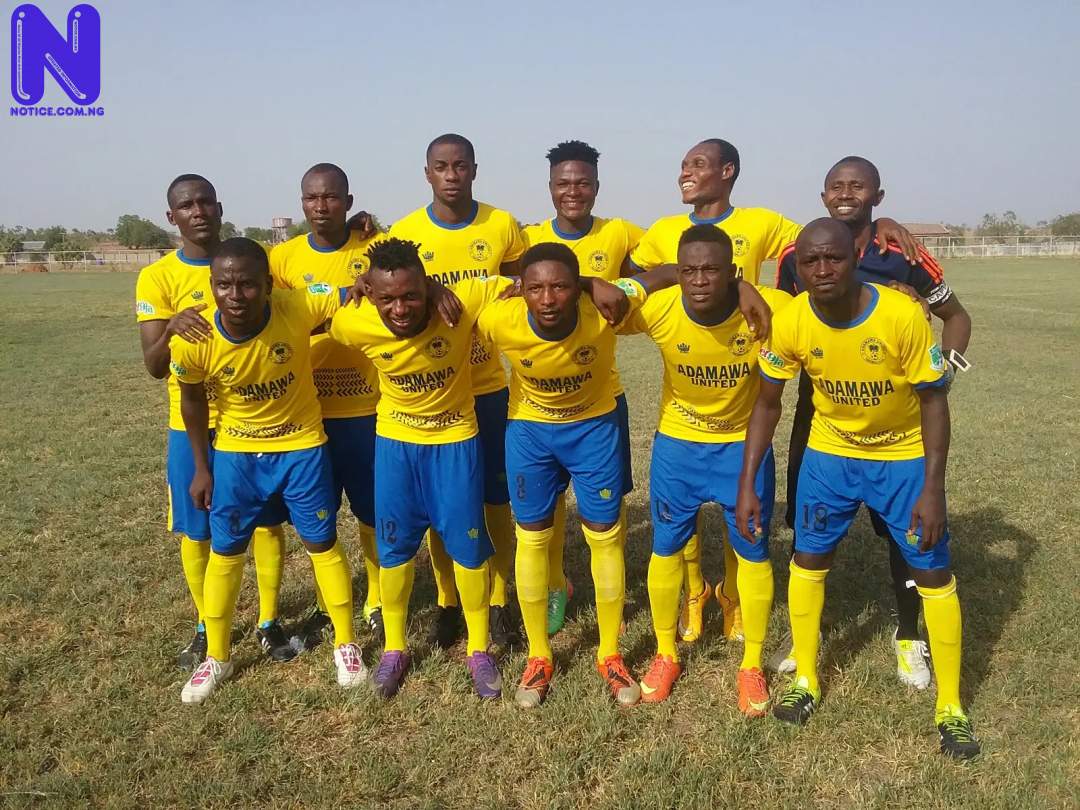 The Adamawa United Football Club players and members of the Supporters Club revolted against the state Ministry of Sports on Monday, pleading with Governor Ahmadu Fintiri to intervene over their problems.

The team and supporters club staged a protest, accusing the Permanent Secretary of the Ministry of Sports, Mallam Hconcerningu Bashiru, of not paying players’ allowances and slaries and of disbanding the team.

The protesters said they had endured enough headache under the Ministry of Sports and asked that the team be placed under the Governor’s Office.

“When the team came back from winning a ticket for premiership league, we expected that the Permanent Secretary in the Ministry of Sports will give them a good welcome back but nothing happened. The players thus cried to us the Supporters Club,” Vice Chairman of the Supporters Club, Musa Babatunde, told newsmen in the course of the protest.

Babatunde added, “Normally, in going out, the players expect allowances. In achieving the goal of the premiership, they expected a very handsome package, but up till now there is nothing. Not even salary or allowances are paid regularly.

“Instead, it is sacking of members of the team that we are seeing. He has disbanded the players that qualified the team for premiership. We want autonomy. We want Adamawa United Football Club pulled out of the Ministry of Sports to the Executive Governor’s Office, so that the team can be better taken care of.”

On his part, captain of the football club, Ibrahim Bulus Pwadadi, said, “We went out, fought hard and won ticket for premiership. Of the four teams that qualified for premiership this year, the other three teams were rewarded handsomely.

“The governor received us and promised to have dinner with us. We are still hoping that the governor will keep his promise. But as things stand now, we don’t have time. We have just about two weeks to the commencement of the league. Yet, Adamawa United has not done anything. We have not finished our recruitment. We don’t know the direction we are taking. We need intervention from the government.

“As things stand now, the players who brought the achievement (of going into the premiership league) are still around but the permanent secretary has disbanded us. Yesterday, he sent the technical adviser to address us, to tell us that there is no team on ground, which means he has sacked everybody.”

Responding to the allegations, in spite of that, the Permanent Secretary of the sports ministry, Hconcerningu Bashiru, disproved some of the allegations and dismissed the rest totally.

On the issue of special package for the team’s players for promotion of the team to the Premier League, the permanent secretary said, “There is no package to pay them for qualifying for premiership. If there is a package, it should come from the National League Management Committee, not from the team management.”

As for the allegation of disbanding the team, the permanent secretary said disbandment is not the right word.

He said, “Nobody disbands the team. When you finish from a junior class, you have finished everything with the junior class. The team that will play premier league will be different from that which played pro-league. We are now in the process of screening members of the team that played pro-league. Some of them may be dropped and fresh players brought in for the premier league.

“My advice is to everyone to join the camp for the screening of players for the team. I think the trouble is that some people want automatic ticket to the premier league team. They don’t want the screening that we are doing.”