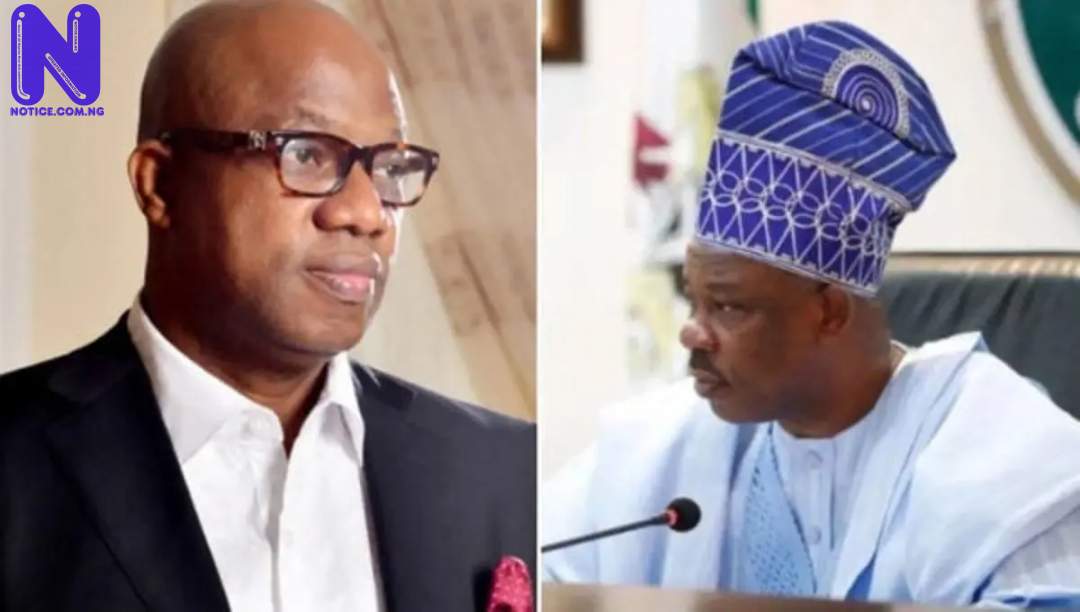 It appears the incumbent Governor Dapo Abiodun and his predecessor, Senator Ibikunle Amosun are yet to agree on the liabilities left behind in terms of gratuities, leave bonuses, contributory pensions and promotion arrears.
Since the beginning of the Abiodun government, there have been issues between him and Amosun on the financial statements of the State.
At first, the two old friends were at loggerheads with each other over what was in the treasury of Ogun State as of May 29, 2019 when Abiodun took over.
In September 2020, Abiodun, during Ogun workers’ strike, claimed that he inherited a sum of N106.9billion as outstanding personnel liabilities from the Amosun administration, a claim that was vehemently debunked by Amosun.
In a statement signed by the Secretary to the State Government, Tokunbo Talabi, at the time, the Abiodun government calculated the liabilities thus:
“Gratuity of exited (retired) Personnel:

Total – N106.9 bn.”
But, the Amosun administration said it could not understand how its successor arrived at the figures it published.
Press reports that for each of the figures, there was a counter-claim from the previous government in its swift reaction.
According to a release by the then Scribe to the State Government, Taiwo Adeoluwa, it was stated that the total outstanding gratuity to the State workers stood at ₦7.63billion as of May 29, 2019.
For local government and SUBEB workers, Adeoluwa said “a total sum of ₦22.9B was the outstanding gratuity” as against the “₦32.5B published, leaving an overstated amount of ₦9.6B.”
For leave bonus, Adeoluwa explained that the liability was overstated by ₦1.6B; claiming that N9.6b was published as against ₦7.6B.
“We noticed also that the amount of ₦46.5 Billion published as the outstanding Contributory Pension liabilities was overstated by ₦5.1 Billion. As the total liabilities stood at ₦41.4 Billion (State – ₦20.03B, LG & SUBEB – ₦21.37B). Respectfully, we cannot, therefore, be held responsible for the outstanding debts of ₦41.4B attributed to us,” he said.
At the time, Adeoluwa added that, “We wish to place on record that we made full disclosure of our financial status and deliberately included that of SUBEB and LGAs.”
Since then, there was no further exchange of words between the two parties as far as the state’s financial statements are concerned.
However, a recent report by the Debt Management Office brought about another claim from the present government.
The Abiodun administration was making efforts to tell the masses that it did not borrow N58billion within June 2019 and December 2020 as indicated in the report of the DMO.
This time, Abiodun’s claim of unpaid gratuity and staff liabilities was N50billion, another figure different from the N106.9billion that was quoted in September 2020.
The government did not explain whether or not the N50billion was from the figure that was published seven months ago.
Abiodun said N50 billion liabilities were not accounted for in the financial report handed over to his government in May 2019.
Press correspondent observes that there was no report of undisclosed workers liabilities when the Abiodun government rolled out the figures in September.
But on Monday, it was said by the state government that the N50billion was the “omitted” financial liabilities incurred by the Amosun’s administration due to unpaid pensions, gratuities and outstanding staff salaries, saying it was surprising that the figure was not allegedly captured in the books left behind by its predecessor.
Almost two years into his administration, Abiodun said he just got to know about the N50billion “in the course of our carrying out due diligence on Ogun State finances shortly after we took over.”
The government confirmed that it was disclosing this for the first time, after the DMO report revealed that the domestic debt indicated that N58billion must have been borrowed, taking congnisance of the fact that the domestic debt stock of Ogun State rose from N95billion to N153billion in 18 months.
“The increase in the 2020 total debt of the state was due to an undisclosed gratuity and staff liabilities of about N50bn not recognized in the State financial statements in May 2019 at the end of the previous administration,” a statement by Gov Abiodun’s Chief Press Secretary, Kunle Somorin, has said.
Meanwhile, the questions on the lips of Ogun residents are: “Has the state government added the N106.9billion staff liabilities it claimed to have inherited earlier to the N95billion domestic debt Amosun left behind and still arrived at N153billion? Does the DMO also capture unpaid salaries, gratuites and other staff liabilities in its debt statistics? Does it mean Gov Abiodun has not borrowed a dime since he assumed office?”
Ogun indigenes are keen to get more clarifications from the parties concerned.