13 houses demolished in Enugu over trespass 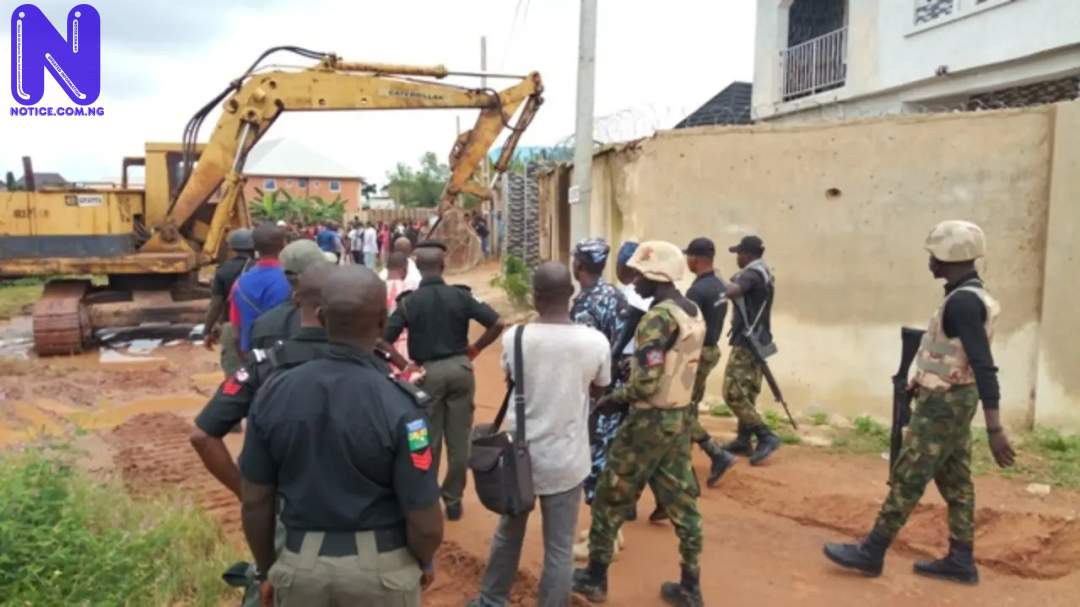 Press gathered that this is in connection with a Court order in the favour of an Enugu based architect, Sir Jonathan Emejulu.

The affected buildings are worth billions of naira.

Emejulu told journalists that he was executing an Enugu State High Court judgment that went in his favour over the ownership of the Layout.

It was learnt that the demotion was earlier halted on Wednesday when the Enugu State Commissioner of Police, Ahmad Abdurrahman invited the contending parties to the state command and invited the OC Legal to interpret the court order to him.

The OC Legal after studying the court documents determined that Arch Emujulu had a genuine court order, consequent upon which the Commissioner of Police gave him the go-ahead to commence the demolition with detachments of mobile and regular policemen.

Emejulu, who arrived the Airport Road Layout, Phase IV and V, Enugu, with a truck load of mobile and regular policemen, and a bulldozer, around 11am Thursday, commenced demolition without let or hindrance, though the owners of the property were seen begging him and promising to come and negotiate with him.

All together a total of 13 buildings, mostly duplexes were partially demolished as the earth moving machines pulled down the entrance fences of the buildings while Emejulu threatened that he would re-visit next week to pull down the main buildings if the occupants failed to negotiate.

Emejulu also said that he would take over and demolish all the structures in the section of the land where the Enugu EN-power Free Trade Zone is sited; claiming that the sprawling land also belonged to him.

He insisted that he bought the layout containing more than 300 plots of land from Umuenwene Iji Nike community in Enugu East local government area of Enugu state in 2008, and that the property was gazetted by the state government before some people started laying claim and trespassing.

He alleged that some powerful individuals in the state, including the Speaker of Enugu State House of Assembly, Rt. Hon. Edward Ubosi; the member Representing Enugu East/Isi-Uzo federal constituency, Hon Cornelius Nnaji; and the State Commissioner for Youth and Sports, Mr. Vitus Okechi were trying to use government connection to wrestle the layout from him.

Architect Emejulu claimed that those trying to take his property by force had two years ago, under the guise of government revocation of the land, entered the land and demolished more than 25 buildings he had erected at the layout at the cost of N400 million.

“We are here to levy second execution on the property, on the layout. I got a court judgment in 2017, from Enugu State High Court and the police ordered for an execution to be levied for me to reclaim my land, which I consequently did last year. Over a year ago, and because of the caliber of people involved, that participated in selling my land to people, they are very powerful people in government, especially Cornelius Nnaji and the Speaker Edward Nnaji, it has been difficult. They said that they will use their connection in government to take away the land from me,” he said.

When contacted, the Speaker of Enugu State House of Assembly, Ubosi and the State Commissioner for Youth and Sports, Okechi alleged that Emejulu was parading fake court judgment, saying that he sued the wrong person who had entered consent judgment whereas the real owner of the land was still in court with him.

Ubasi specifically denied that he owns or sold any land in the estate to anybody but was aware that the original owners of the land were Umuchigbo community, who sold the land to one Chief G. O. D. Eneh, who in turn has dragged Emejulu to court, EFCC and ICPC.

“Please write whatever he asks you to write, that thing is old news. That is fake document. The land did not belong to the Umuenwenne community that he claims gave him that land. The land belongs to Umuchigbo and Umuchigbo gave it to G. O. D Eneh, who is in court. He has even taken the man (Emejulu) to EFCC, ICPC, the man is just there trying to make trouble.”

Mr. Okechi on his part said that he bought part of the land from the rightful owner, Chief Eneh, which he sold to some people, insisting that Arch. Emejulu was parading fake court judgment.

But reacting to the allegation by Ubosi and Okechi, Emejulu said, “Please that will show you the caliber of people I’m talking about, a Speaker of Enugu state to be saying that thing, an epitome of the law in the state, it shows that he is not well informed, how can he say that? That judgment of High Court is fake? That this land belongs to G. O. D. Eneh; they have a boundary, G. O. D Eneh’s land; its Umuchigbo that sold the land to G. O. D. Eneh; Umuenwene sold to me.

“And they started saying that this land belongs to G. O. D Eneh, I went to court against Umuchigbo people and I got judgment against them, the boundary was there, designed, so the man was talking rubbish”.