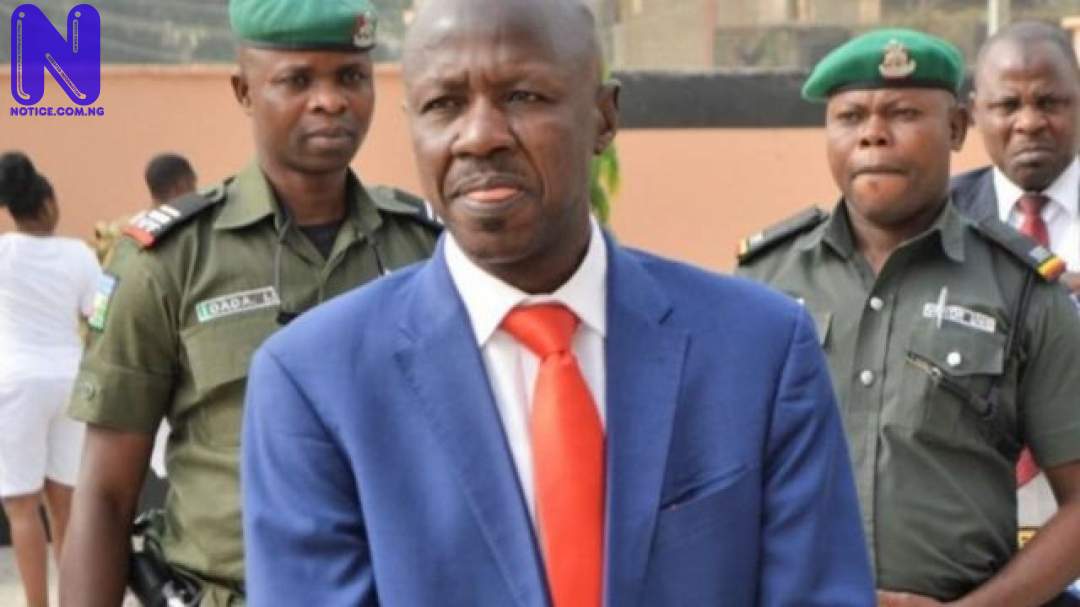 The legal team of suspended Economic and Financial Crimes Commission (EFCC), Ibrahim Magu, has thrown ten questions to the presidency and Justice Ayo Salami-led panel.
The police officer had tendered a 44-page document containing his defense.
Magu insists that the allegations against him were fabricated and meant to tarnish his image and EFCC credibility.
On July 6, he was arrested by a combined team of the Department of State Services (DSS) and Police and freed after 9 days.
In a statement made available to Press on Saturday, Magu’s counsel, Tosin Ojaomo, urged the Justice Salami panel to be just and fair in its probe.
During Magu’s incarceration, DCP Idowu Owohunwa, Principal Staff Officer to the Inspector-General of Police (IGP), Mohammed Adamu, wrote to Ojaomo.
The PSO told the lawyer that suspended EFCC boss was being held by the presidency not the Police.
Now, Ojaomo wants answers from the presidency and Salami.
He quipped: “Why is the panel inviting suspects facing EFCC trial?
“What is the basis of the panel’s invitation to a senior lawyer, Mike Ozekhome (SAN), a lawyer that is defending the looters of our common patrimony, especially those who are under EFCC’s investigations and trial?
“Is it not curious that while the lawyer to Magu, Wahab Shittu, deliberately refused to disclose what transpired before the panel, Ozekhome and Obla issued statements and made public what transpired before the panel.
“What is the propriety of the panel’s invitation to a disgruntled official of the EFCC, Nuru Buhari Dalhatu, to come and testify against Mr Magu while the said Dalhatu is under investigation for misconduct and fraternizing with suspects?
“What is the justification for the panel’s invitation of another senior lawyer, Godwin Obla (SAN), who is currently facing EFCC’s trial with an indicted judge of the Federal High Court?
“Is it not strange that Obla made a damning revelation on what transpired before the panel and went ahead to demand for his outrageous legal fees of N763million and the striking out of the charge against him?
“Why is the panel hostile to Mr Magu at any time he tried to take up issues with those invited to testify against him?
“How come that a fact finding panel over allegations of corruption against Mr Magu has now turned to a platform where certain individuals whose actions and antecedents fit into the description “corruption enablers” as well as “haters of the war against corruption” and its leadership are being invited to testify against Mr. Magu?
“There is the need to ask this important question- Has any witness testified that he or she gave xyz amount to Mr Magu in order to compromise cases before him?
“Why is it that the Salami-led panel is yet to serve and confront Mr Magu with all the allegations against him and what are the terms of reference of the panel?”