10 things you need to know this Friday morning - Nigerian Newspapers 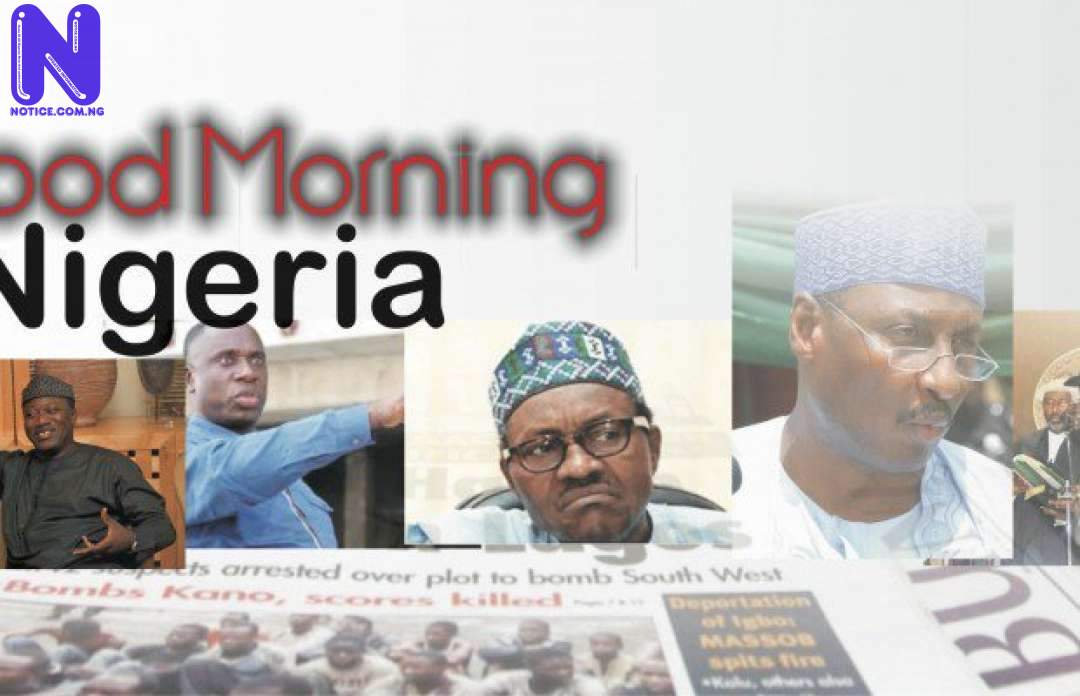 1. The Senate, on Thursday, adjourned plenary till Jan. 16, for the Christmas and New Year break.

This followed a motion moved by the Majority Leader, Sen. Ahmed Lawan (APC Yobe), at plenary and seconded by Sen. Philip Aduda (PDP-FCT) on behalf of the minority.

2. A Yoruba socio-cultural group, Afenifere, on Thursday declared that it will on Tuesday 29th January 2019, formally endorse the candidature of President Muhammadu Buhari as its preferred presidential candidate ahead of the 2019 general elections.

The group made this known shortly after its meeting held at the House of Chiefs, Secretariat in Ibadan, the Oyo State capital.

Residents claimed that a motor bike-riding gang of armed men opened fire on locals harvesting sweet potatoes on their farms at Garin Halilu village, killing nine on the spot in the afternoon.

4. The Vice Presidential candidate of the Peoples Democratic Party, PDP, Peter Obi has revealed what makes him sad about Nigeria.

Obi said that the recent report of over 87 million Nigerian People being out of job was a sad one.

6. The national chairman of the main opposition party, Peoples Democratic Party, PDP, Prince Uche Secondus says Nigeria under the watch of the ruling All Progressives Congress, APC, has collapsed.

The national chairman lamented the rising level of insecurity in the country, which he said led to the assassination of the Ex-Chief of Defence Staff, Alex Badeh.

7. Shehu Sani, the Senator representing Kaduna Central has reacted to the All Progressives Congress, APCís allegation of procuring Russian hackers to penetrate Independent National Electoral Commission, INEC, servers ahead of the 2019 general elections.

Sani said such allegation by the ruling party is ëan excuseí, as it is untenable for Russia to meddle with 2019 election.

9. The House of the Representatives, on Thursday urged the Inspector General of Police, IGP, Ibrahim Idris, and the Director-General of the Department of State Services, DSS, Yussuf Bitchi, to hasten the hunt for the killers of Ex-Air Chief Marshal, Alex Badeh.

The call to action by the lawmakers followed the adoption of a motion moved under matter of public urgent importance titled ìneed to investigate the killing of Air Chief Marshal Alex Badehî by Hon. Abdulrahman Shuaibu Abubakar at the plenary on Thursday.

10. The Super Eagles of Nigeria and Pharaohs of Egypt will play each other in a friendly encounter on March 26, 2019.

The Egyptian Football Federation confirmed this on their official Twitter handle on Thursday.